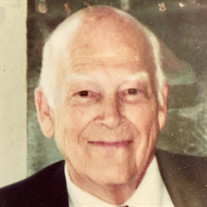 William T. Norris passed away on November 2, 2020, in Palm Harbor, FL. He was born in Bronx, NY on May 26, 1926, of Irish parents, Jane Richmond and William Norris. His earliest job was to help his father each day before grade school, delivering milk by horse and buggy. He served in the U.S. Navy during WWII as a flight mechanic. Bill married Eleanor Poloso and had two sons, Bill and Cliff. He worked in telecommunications for Bell Telephone and AT&T. In 1959 he moved his family to Orangeburg, NY, where he was very active in his community and with his sons. He coached little league and became a Scout Den Leader. He also served as a deacon at his Presbyterian church in Blauvelt. Bill moved with his wife to Palm Harbor, FL, in 1988 to spend their golden years. He became an extremely active member and leader of many Highland Lakes’ clubs, as well as the Veterans Club, Lions Club, Masons, neighborhood watch, and he served as a pontoon boat captain, where he told many a tale. He earned his pilot’s license and loved to fly small planes. Bill loved to dance and to travel with his wife. There was never a day that Bill did not have a smile on his face and an optimistic view. He brought smiles and laughter to everyone he met with his stories, jingles, and jokes. He was married to the love of his life, Eleanor for 73 years. She predeceased him by 36 hours. He is survived by his sons, Bill and Cliff, three grandchildren, and six great grandchildren. Bill’s family wishes to extend their heartfelt gratitude to Suncoast Hospice for their compassionate care. A memorial and celebration of life ceremony will be announced at a later date. For those who wish to remember Bill, in lieu of flowers, donations in his name would be gratefully received by Suncoast Hospice.

William T. Norris passed away on November 2, 2020, in Palm Harbor, FL. He was born in Bronx, NY on May 26, 1926, of Irish parents, Jane Richmond and William Norris. His earliest job was to help his father each day before grade school, delivering... View Obituary & Service Information

The family of William Norris created this Life Tributes page to make it easy to share your memories.

Send flowers to the Norris family.