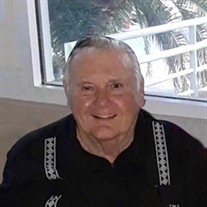 On Tuesday, March 22, 2022, William J. Nickisher Jr., loving husband and father of five, passed away at age 88. Will was born on March 24, 1933 in McKees Rocks, Pennsylvania to William J. Nickisher Sr. and Rose T. (Butter) Nickisher. In 1958, he met the love of his life, Sally, and the two love birds were married six (6) months later on November 22, 1958. This devoted and loving marriage blessed Will and Sally with five (5) children; Lee, Tommy, John, Lori, Connie, ten (10) grandchildren; Nikki, Kristin, Erika, Eryn, John Ryan, Stevie, Niko, Tyler, Ashley, Connor, and five (5) great grandchildren; Barrett, Ace, William, Easton and Knox. Will moved down to the Panama Canal Zone when he was a young child and was an electrician by trade. He eventually became the head of the Electrical Division in the Panama Canal Zone. He was also very athletic, and played high school and college football (Canal Zone College), was president of the Pacific League Softball, refereed high school football and was an avid golfer. When he wasn’t playing or referring sports, he enjoyed hanging out with his friends and family, cheering on the Pittsburgh Steelers, running the LaBoca Christmas Block Party and throwing one heck of a fish fry. Will was known for his witty humor, generosity and sincere personality. Will was preceded in death by his wife, Sally; father, William; mother, Rose; brother, Raymond and sister, Rose. Family and friends who have been impacted by Will are invited to St. Michael’s the Archangel (2281 SR 580, Clearwater, FL) on Friday, April 8, 2022 at 10 a.m. We will then proceed to Curlew Hills Memorial Gardens where he will join the love of his life, Sally, and be laid to rest. Following the procession, a celebration of his wonderful life will be held at the Elks Lodge in Dunedin (1240 San Christopher Dr., Dunedin, FL).

The family of William J. Nickisher Jr. created this Life Tributes page to make it easy to share your memories.

Send flowers to the Nickisher family.