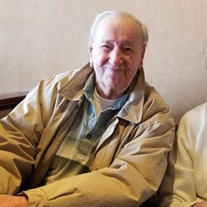 Walter Miros, 95, of Clearwater, Florida, passed away from natural causes on January 1, 2022. He was born in Bayonne, New Jersey in May 1926 to the late Frank and Mary Miros, where he grew up. He proudly served in the U.S Navy during World War II on the U.S.S. O'Neill. He married the love of his life, Marion (Giles), in 1949 and settled in Sayreville, New Jersey, raising their four children. After attending Seton Hall University, Walter began a long career with Procter & Gamble at its Port Ivory, NY location. He retired in 1987. He and Marion loved the beach. They often spent double dates in Atlantic City and eventually retired to Tarpon Springs, Florida where they enjoyed the beach, golf, travel, and activities with many friends. Walter and Marion volunteered for many years into retirement as ushers with The Straz Center in Tampa, Florida and Clearwater's Ruth Eckerd Hall. There they enjoyed seeing all the Broadway shows, well-known singers, and dancers they passionately loved. Walter had a big personality and a big heart, no one was a stranger to him. He loved to assist others in need, sometimes paying for the groceries of someone in need at the grocery store. He volunteered his time for neighborhood civic associations, Boy Scouts, and was an H.O.A. board member. Walter loved his children, grandchildren and great-grandchildren, each of which he had endearing nicknames. He spoiled them with love, experiences, and fun times. He is survived by his beloved wife of nearly 73 years, Marion, his loving daughters and son, Walter T. Miros, Jr., Diane Pinder Koshinskie (Robert), Debbie deHaas (Christopher) and seven grandchildren, Dean Miros, Walter T. Miros, III, Elizabeth Dailey, Thomas Pinder, Andrea deHaas, Nicholas deHaas, Monica deHaas, and two great grandchildren, Aliyah Merced and Gwyndolen Bowman, a devoted brother, Chester Miros, and other extended family members. Interment will be privately held at Sacred Heart Cemetery, Sayreville, New Jersey, alongside his beloved daughter Donna who predeceased him in 1972. Memorial donations may be made to the Duke Cancer Institute's Prostate and Urological Cancers Fund at https://www.gifts.duke.edu/dci?technique_code=CCCWBDNN.

Walter Miros, 95, of Clearwater, Florida, passed away from natural causes on January 1, 2022. He was born in Bayonne, New Jersey in May 1926 to the late Frank and Mary Miros, where he grew up. He proudly served in the U.S Navy during World... View Obituary & Service Information

The family of Walter Miros created this Life Tributes page to make it easy to share your memories.

Walter Miros, 95, of Clearwater, Florida, passed away from natural...

Send flowers to the Miros family.