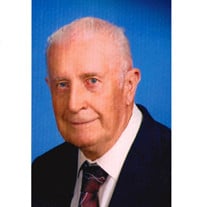 W. Lee Robertson, 96, of Redington Shores, Florida, and formerly of Elgin, Illinois, died peacefully on December 11th, 2021, at the home of his daughter. Lee was born August 10, 1925, in Quincy, Illinois son of James Christian and Clara Henrietta Shriver Robertson. He married Lydia Lou Holmes on July 3rd, 1949, in Quincy, Illinois. She preceded him in death on March 22nd, 2012. Lee was raised on a farm near Fowler, Illinois, enlisted in the U.S. Navy after high school and was subsequently assigned to the Pacific Theater, during World War II. Following his military service, Lee attended the University of Illinois. He graduated with a degree in vocational agriculture and taught at high schools in Liberty and Richmond, Illinois. He was employed by Commonwealth Edison for 38 years, as a marketing representative for agricultural, residential, and commercial electric services, in the Chicago suburbs. Lee greatly enjoyed collecting rocks, and minerals, and tending to his large garden. He also served on the Kane County Fair Board in many leadership roles, well past his retirement in 1988. Surviving him are his three children Lynn Vacherlon (James), Carol Feguson (Steve), and Dean Robertson (Kathy); four grandchildren: Candace Aldrich, Laura Cline, Lisa Kaszubski, and Maxwell Robertson; five great-grandchildren; his brother, Kenneth Robertson, and sister Bonnie Davis. He is preceded in death by his parents, and two brothers, Keith, and Donald Robertson. A memorial is planned for 11 am Saturday, April 23rd at Ellington Memorial Presbyterian Church, 4600 N. 36th St. Quincy, Illinois. Memorial: In lieu of flowers, memorials may be made to Ellington Memorial Presbyterian Church, P.O. Box 3125, Quincy, IL 62305 or Chaddock Children’s Foundation in Quincy, Illinois, either online at Chaddock.org/support/donate, or sent to Chaddock Children’s Foundation, 205 South 24th Street, Quincy, IL 62301.

The family of W. Lee Robertson created this Life Tributes page to make it easy to share your memories.

Send flowers to the Robertson family.