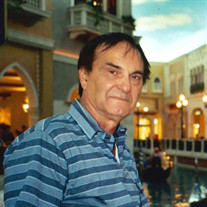 SOTIRIOS AGELATOS August 16, 1946 – November 4, 2020 It is with heavy hearts that our family announces the sudden passing of Sotirios Agelatos, on November 4 ,2020, at the age of 74. Sotirios was born in Andriolata, Cephalonia, Greece. Sotirios will be lovingly remembered by his wife, Darlene, of 43 years, and their daughters, Zoe Katherine, and Roxanne ( Bobby) Christo, and grandsons Mark and Jason. He also leaves to mourn his loss brothers Gerasimos ( Salome) of Vancouver, Canada, Nick (Kathy) of Kelowna,Canada, Demetrios (Siegrid) of Surrey, Canada, George (Donna) of Langley, Canada, sister Penelopi (Yianni) of Greece, Angelo (Antigoni) of Florida and many nieces, nephews, and friends. He was pre-deceased by a three year old brother George in Greece. Even though Sotirios lost his mother at the age of three and because of the post-war difficulties in Greece at that time the large family was separated and Sotirios grew up in an orphanage. But these difficult years did not deter him from ambition and success. Upon finishing school in Greece, he embarked on his own. First at the age of 18, he enlisted for employment on commercial ships as an electrical engineer and travelled the world on these ships. In his early twenties, he arrived on one of those ships in Canada and began a new life where he met Darlene. They were married in 1977 and during one of their travels discovered the sunshine state of Florida and emigrated there in 1979. He became interested in broadcasting and throughout his lifetime purchased two radio stations and one television station with the intention of promoting the Greek language, history and culture. He was a proud Greek – American, involved in various cultural associations, such as, the Cephalonian Society, American Hellenic Society, and the Greek Independence Day Parade association. He was one of the original members and organizers of the Parade association and presided as President and Chairman for many years. He cherished his family time and enjoyed activities with them, such as, swimming, and travelling within the U.S., Canada, Greece. Every summer for many years he would drive his family to many places within the U.S., not just for travel enjoyment but with the purpose of education. He was proud of his daughters and encouraged them to succeed in their endeavors. He was especially grateful recently when Jason was born and Roxanne and Bobby gave Jason the name Sotirios for a middle name. Sotirios will be remembered for his love of family, heritage and many accomplishments. May he rest in eternal peace. He will be forever in our hearts. Funeral services will be held at the Holy Trinity Greek Orthodox Church in Clearwater, on Monday, November 9, 2020 beginning with visitation at 11:30 a.m. and funeral service at 12:30 with Father Rev. Jim Paris presiding. Burial and funeral arrangements are being made by Curlew Hills Memory Gardens in Palm Harbor. In lieu of flowers, the family would appreciate donations to the Holy Trinity Greek Orthodox Church building fund.

SOTIRIOS AGELATOS August 16, 1946 &#8211; November 4, 2020 It is with heavy hearts that our family announces the sudden passing of Sotirios Agelatos, on November 4 ,2020, at the age of 74. Sotirios was born in Andriolata, Cephalonia, Greece.... View Obituary & Service Information

The family of Sotirios Agelatos created this Life Tributes page to make it easy to share your memories.

Send flowers to the Agelatos family.