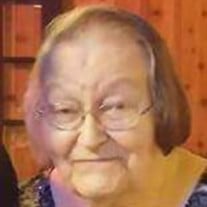 Rosemarie Margot Lynch died on November 6, 2021, at her home in Seminole, FL. She was 80 years old. Rosemarie was born in Iserlohn, Germany to Walter and Ruth (Peck) Emde on October 1, 1941. She is survived by her sisters, Cora Pandy and Roberta Gross; by her children: Loretta Ralston and her husband, Patrick; Walter Lynch and his wife, Maris; Michael Lynch and his wife, Joyce; and Dennis Lynch and his wife, Carolyn; by her grandchildren Sean Lynch, Daniel Lynch, Steven Ralston, Ryan Lynch, Magdalena Ralston, and Jack Lynch; and four great-grandchildren: James, Abram, Grace, and Leo Lynch; as well as many nephews and nieces. She was preceded in death by her husband, Dennis, daughter Linda Bucco, and brother Walter Emde. She was born in Germany during World War II. In 1952, three days after her eleventh birthday, she moved to the United States with her mother, grandmother, brother Walter, and sister Cora. She was born with a heart defect and underwent open-heart surgery at the age of 16, after which she was informed that her heart would never be healthy enough to bear the strain of pregnancy. Rosemarie was never fond of being told what she could not do, so despite that medical advice she bore and raised five children. Rosemarie worked for the City of Long Beach, NY, for more than 25 years, first as a cashier at the Recreation Center and later as an accounts payable clerk in the Comptroller's Office. She was a loyal and active member of the People's Church of Long Beach for many years before moving to Florida. Rosemarie was generous and devoted to her family, often providing support for family members who were going through difficult times. Her grown children and grandchildren, along with their friends, were welcome in her house when they needed a place to stay. She was very gifted in crafts like needlepoint and crocheting, among others, and used her talents to create memorable gifts for family and friends. All of her grandchildren and great-grandchildren—as well as the children of relatives, friends, and people she never met—received their own copies of her memory game, a set of blocks, a blanket, or a sweater or other article of clothing stitched with love. In recent years, she donated her talents to an organization called Knitted Knockers by knitting handmade breast prostheses for women who had received mastectomies. She would also make children’s gifts or tote bags (made out of recycled plastic grocery bags) to donate to churches or other nonprofit organizations as part of their fundraisers or outreach services. She frequently worked on her crafts while watching her favorite game shows, “Jeopardy” and “Wheel of Fortune.” Watching these contests could become competitive in the Lynch home, as Rosemarie and others tried to yell out the correct answer first. With her encyclopedic memory of trivia, especially history, Rosemarie was a game-show-watching force to be reckoned with. After retirement, Rosemarie fulfilled a few life-long dreams by making trips back to Europe. On one trip, she visited Germany with her daughter Linda; the journey included a sightseeing tour of the Hummel Factory, where she added to her collection of figurines, and a stop in one of her childhood hometowns, a tiny village named Sonnefeld. On a later trip, she sailed alone to England on the Queen Mary, visited Stonehenge, and returned home on the Concorde. Both the Queen Mary and Concorde were approaching their final journeys, and Rosemarie made a point of riding on them while there was still an opportunity. A Memorial Service for Rosemarie will be held at 10:00 a.m. on Sunday, November 21st at Curlew Hills Memorial Gardens, 1750 Curlew Road in Palm Harbor, Florida, followed by a reception at Rosemarie's home in Seminole at 1:00 p.m. In lieu of flowers, donations may be made to the American Diabetes Association or the American Heart Association.

Rosemarie Margot Lynch died on November 6, 2021, at her home in Seminole, FL. She was 80 years old. Rosemarie was born in Iserlohn, Germany to Walter and Ruth (Peck) Emde on October 1, 1941. She is survived by her sisters, Cora Pandy and Roberta... View Obituary & Service Information

The family of Rosemarie Margot Lynch created this Life Tributes page to make it easy to share your memories.

Send flowers to the Lynch family.