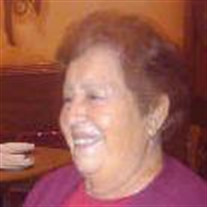 Beloved wife, mother, sister, grandmother, great grandmother and friend, Rosalia (DiGiovanni) Menna, passed away early Tuesday morning, October 5th. She was 83 years old. She left this earth having been surrounded by family in her final days. Rosalia, also known as Rosalie, and most importantly, Nonna, was the eldest of six children to Luca DiGiovanni and Maria D’Attilio. She was an immigrant twice over having embarked across the Atlantic to Canada from her birth town of Roccamorice, Pescara, Italy when she was in her teens. She and her husband later moved to Florida in 1972. Rosalia married her teenage sweetheart, Pantaleone, and together they shared four, vibrant boys: Antonio (Anthony), Giovanni (John), Mario and Bruno. She and Leon were avid ballroom dancers and lovers of life. Rosalia and Leon were formerly the proud owners of the Orange Motel located in Clearwater, Florida for several decades. It was this establishment that cultivated a livelihood that would be passed on from generation to generation. Having lost her husband all too soon, Rosalie found a companion in Alfonso Castagnini over the last 25 years. Family was the cornerstone of Rosalia’s life and she was often found in her kitchen cranking out meals that could feed a small army. Nothing brought her more satisfaction than to see her family gathered around the table enjoying the fruits of her labor. She was truly the embodiment of a matriarch and wanted nothing more than to watch her progeny grow and flourish. She is survived by her siblings, Iolanda, Angelina, Luisa, Pat, and Livia, her sons, Anthony and Mario, their wives, seven grandchildren, Lia, Amanda, Anthony, Alex, Alessia, Isabella and Giulia, and three great grandchildren, Luca, JD and Maddie. Her memory will forever live on in our hearts. Please make donations to https://suncoasthospice.org/donate/

The family of Rosalia Menna created this Life Tributes page to make it easy to share your memories.

Send flowers to the Menna family.