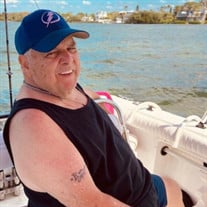 With heavy hearts, we announce today that our loving father was called to be with the Lord our God on March 30th 2021. Ronald Anthony Bonomo, born to the late Rocco and Jennie Bonomo on May 21st 1945 in Camden, New Jersey. Where he grew up with his two brothers, Vincent Bonomo and Daniel Bonomo. He also became a proud uncle of Danielle, Steven, Lisa, Michele and Mark and a great uncle of 11 beautiful children. Ron was previously married to Linda Bonomo for 24 years, they met in New Jersey and was blessed with a loving family they raised in Florida. He gained two brother in-laws Mark, David and sister-in-law Marilyn Watson. Although separated, Ron and Linda’s relationship continued strong; the love for one another and their family union continued to run deep. Ron was a proud father of his 3 children Ronald Anthony Jr., Michael Richard and Ashlee Ann. He gained a son-in-law Bryan, as well as a daughter-in-law Marie. He was blessed with 3 amazing grandchildren Michael Gabriel, Blake Anthony Perri and Brayden David Perri. His children, is what he truly lived for and who called him Dad, Daddy-O, Pops and Pop-Pop. We were all so very close. Ron was such an amazing man. Everywhere he went he grew smiles, laughter and a friend. Ron always put others first and would give you the shirt off his back. He welcomed all with open arms and never made you feel unwelcomed. His laugh was contagious and one of a kind. Ron was a simple man. He loved to go crabbing, fishing and loved being on the boat in the open waters. He enjoyed cooking and baking, while listening to his music. His music choice was doo wop, country and Oldies. He had a deep love for his sports. He was a huge fan of his Tampa Bay Rays, Tampa Lightning, Tampa Bay Bucs, and Dallas Cowboys. Can’t forget his wrestling. WWE/Smack Down and Monday night RAW. Ron has touched so many hearts. Our Daddy was the absolute best man in the world, and he will always be with us. The void created in the wake of his loss will never be filled; but the love he left, will live on forever in the hearts of the people he touched. We love you every day and always! May he Rest in Peace with his friends and family in heaven; forever watching over all of us.

With heavy hearts, we announce today that our loving father was called to be with the Lord our God on March 30th 2021. Ronald Anthony Bonomo, born to the late Rocco and Jennie Bonomo on May 21st 1945 in Camden, New Jersey. Where he grew up with... View Obituary & Service Information

The family of Ronald Anthony Bonomo Sr. created this Life Tributes page to make it easy to share your memories.

With heavy hearts, we announce today that our loving father was...

Send flowers to the Bonomo family.