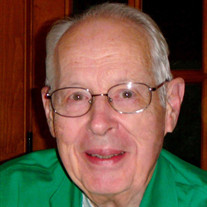 Robert L. Walker, 92, of Palm Harbor, Florida, and Chautauqua, New York, died June 30, after a short illness. He was born in 1929 in Jersey City, New Jersey, to Helen and Raymond Walker. He spent most of his childhood in Westfield, New Jersey, and as a teenager moved to Paris, France. After graduating high school from the American School of Paris, Bob earned his B.A. from Monmouth College in Illinois, and an M.A. in industrial management from the University of Pittsburgh. Bob met his wife Barbara at Momouth. They were married for more than 60 years, until her death in 2012. He served in the U.S. Army during the Korean War, stationed at Fort Belvoir, Virginia. In 1954 he joined Harris-Seybold Company in Dayton, Ohio. Bob spent his entire career working in finance at what would eventually become Harris Graphics Corporation, a major manufacturer of printing presses and equipment. From Dayton, his career took him to Cleveland, Ohio; Paris, France; Mystic, Connecticut; Melbourne, Florida; and finally back to Dayton, where he retired as vice president of finance. He particularly enjoyed his seven years as corporate controller with Marinoni, Harris’s French subsidiary. Bob was an avid clock and watch collector, a history buff, a fine singer and pianist, and a skilled carpenter. He loved traveling and spending summers in Chautauqua, New York. In 2015 he married an old family friend, Lucille (Becky) Sharp (died 2021), and enjoyed five years living in Florida at St. Mark Village. He was a patient, kind, and generous man, and a beloved husband, father, and grandfather. He is survived by son Mitchell (Sarah Hoban) of Barrington, Illinois; daughter Margaret (John Wallace) of Cornwall, Vermont; grandchildren Anna Walker, Kate Wallace, and Jack Wallace, and many cousins. Donations in his memory may be made to a scholarship fund he established at Monmouth College, with checks payable to Monmouth College, memo “Robert L. Walker Scholarship Fund,” and sent to Monmouth College, Office of Development & College Relations, 700 E. Broadway, Monmouth IL, 61462. A memorial service and burial will be held at a later date in Dayton, Ohio.

Robert L. Walker, 92, of Palm Harbor, Florida, and Chautauqua, New York, died June 30, after a short illness. He was born in 1929 in Jersey City, New Jersey, to Helen and Raymond Walker. He spent most of his childhood in Westfield, New Jersey,... View Obituary & Service Information

The family of Robert L. Walker created this Life Tributes page to make it easy to share your memories.

Send flowers to the Walker family.