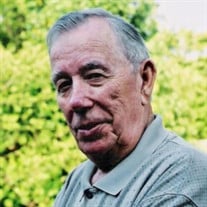 Robert “Bob” Vrooman Muir, 96, husband of the late Hilda Muir, passed away peacefully at home in Clearwater, Florida on Sunday, October 24, 2021. He was born on August 6, 1925, in Schenectady, New York to parents Archibald and Maude Muir. Bob served in the US Navy during WWII and was a member of American Legion Turner-Brandon Post #7, IFPTE Local 147 and the GE Apprentice Alumni Association. He retired from General Electric after 43 years of service and moved from Charlton, NY to Clearwater, FL in 1992. Bob was an avid bowler and has bowled many perfect games. Robert is survived by his daughter, Nancy Lockwood of Scotia, NY, granddaughters, Tamara (Sean) Chatterton of Newport News, VA, and Tessa Muir of Claremont, NH, and grandsons, Jeremy (Jennifer) Muir of Charlton, NY, and Jason (Jennifer) Lockwood of Scotia, NY. He is also survived by Twelve great grandchildren, two great, great grandchildren, his brother Wilfred “Bill” Muir of St. Paul, MN and his niece and nephew. In addition to his loving wife Hilda, Robert was predeceased by his son, Robert “Skip” Muir. The family would especially like to thank his wonderful friends and neighbors, Patty and Jim Radel, friend and helper Lisa Hancock, helper Andrea Lombardo and favorite Angel Haylee Shanahan

The family of Robert Muir created this Life Tributes page to make it easy to share your memories.

Send flowers to the Muir family.