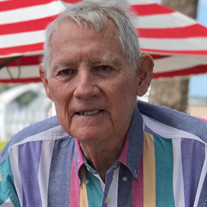 Robert Preston Beem, Age 88, died Sunday, March 27, 2022, at Cedars at Mease Life in Dunedin, Florida. The few days before his death he was surrounded by his loving wife and three daughters. Robert was born January 17, 1934, in Columbus, Ohio, to Henry Preston and Rachel Lucille Maxwell Beem. He was a lifetime member of the Methodist church. He first attended college at Ohio University in Athens Ohio, where he studied pre-dental. Here he joined the fraternity Sigma Nu. He then went to Ohio State University where he received his DDS degree in dentistry. While in college he met the love of his life, Margaret (Margee) Lou Bennett, at the 1954 New Year’s Rose Bowl game. They were united in marriage June 8, 1957, and enjoyed 64+ years of marriage. After graduating from dental school in 1958, Bob joined the Army. He served for three years. He moved his family to Dunedin Florida in 1962. That same year Bob began his dentistry practice in Dunedin where he and Margee raised their family of three girls. Bob retired in 1993 after 31 one years of practice, and spent the rest of his days enjoying the Florida sunshine, and traveling with Margee. Bob will be remembered as a fiery soul and a loving, goofy father and grandfather. He cherished hearing his grandchildren’s laughter, and he used silly voices and jokes to get the desired effect. He loved to travel the world, visit his grandchildren, and invest in the stock market. Bob was active, running the Gasparilla 12K for many years. He also loved the Florida beaches, water, and just being outdoors. Bob and Margee would spend most mornings enjoying breakfast and walks out on the Dunedin Causeway. Bob is survived by his wife, Margee, and their three children: Susan Thomas and her husband, Jules; Beth Jensen and her husband, Steven; and Jennifer Mitchell and her husband, Max. He is also survived by his nine grandchildren and five great-grandchildren: Kelly Thomas, Robert Thomas, Max Mitchell, Rachel Mitchell, Katie Mitchell, Nicholas Mitchell, Matt Jensen and his wife, Emelie, and their children, Leighton and Nolan; Jessica Schlawin and her husband, Cody, and their children, Kennedy, Bowen, and Beckam; and Sarah Adams and her husband, Parker. In lieu of flowers, the family requests that donations be made to Seasons Hospice Foundation 8537 Solution Center, Chicago, IL 60677 A private family service will be held at a later date.

Robert Preston Beem, Age 88, died Sunday, March 27, 2022, at Cedars at Mease Life in Dunedin, Florida. The few days before his death he was surrounded by his loving wife and three daughters. Robert was born January 17, 1934, in Columbus, Ohio,... View Obituary & Service Information

The family of Dr. Robert Preston Beem created this Life Tributes page to make it easy to share your memories.

Send flowers to the Beem family.