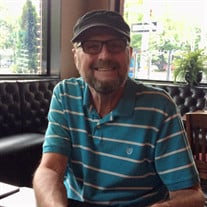 Ricky “Rick” Hurst passed away unexpectedly at his home in Dunedin, Florida on February 19, 2022. He was 66 years old. He was born in Gary, Indiana on September 1, 1955. In his youth he had a passion for playing soccer and played the sport in Europe. He graduated from Lew Wallace High School in 1973 and welcomed two sons, Robert Eugene Hurst in 1979 and Nathan Christopher Hurst in 1980. He worked at US Steel until 1984 when he relocated to Dunedin, Florida then Oldsmar, Florida shortly thereafter. In 1995 he returned to his hometown to resume working at US Steel. Soon after, he met his partner Rebecca Lynn Thorpe. The couple resided in Portage, Indiana with Rebecca’s daughter Tayler Emily Thorpe, who he became a father to. He retired from US Steel in 2018, and in 2021 moved back to Dunedin, Florida. Ricky was hardworking, outspoken, and stubborn. At 6’ 6” tall, he was a gentle giant with a heart of gold. He was a devoted dad who always had advice to offer, a hand to help, and an ear to listen. He wholeheartedly loved his children, and was very proud of their accomplishments. He loved and adored all three of his grandchildren. He dreamed of retiring in Florida where he could watch them grow up. Ricky was an avid sports lover and lifelong fan of the Chicago Cubs, Chicago Bears, and Norte Dame. He enjoyed golf and fishing. He took pride in his yard, garden, and grilling skills. If he wasn’t outside in his yard, you could find him in his recliner with a glass of whiskey, watching the news or his favorite shows. He loved dogs, especially his late Shitzu Gia Sophia. Ricky is survived by his children, Robert Eugene Hurst, Nathan Christopher Hurst, and Tayler Emily Smith; his children’s spouses, Carmen Chan, Christina Coghlan, and Kyle Smith; his siblings, Howard Charles Hurst, Shelia Diane Sut (Hurst), and Jeffery Allen Hurst; and his grandchildren, Clarence Julian Hurst, John Edward Hurst, and Julia Elle Hurst. He is preceded in death by his parents Robert Edmond Hurst and Reva Dean Hurst; his partner of 20 years, Rebecca Lynn Thorpe; and his beloved Shitzu Gia Sophia. A memorial service will be held at Curlew Hills Memorial Gardens in Palm Harbor, Florida on Saturday March 5, 2022 at 2:00 pm.

The family of Ricky Hurst created this Life Tributes page to make it easy to share your memories.

Ricky “Rick” Hurst passed away unexpectedly at his home in Dunedin,...

Send flowers to the Hurst family.