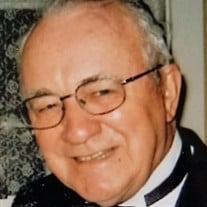 Richard John Whalen, &#8220;Dick&#8221;, 90, passed peacefully from this life at his home in Dunedin, FL on March 15, 2021. Our beloved family-man, friend, mentor, boss, patriot, and brother Mason led an active and full life. He made the most... View Obituary & Service Information

The family of Richard Whalen created this Life Tributes page to make it easy to share your memories.

Send flowers to the Whalen family.