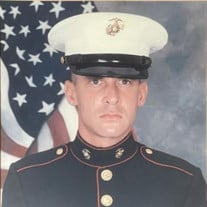 Gunnery Sargent Randy Allen Fowler lost his short 10-month battle with pancreatic cancer on June 14, 2021. He is survived by his wife Pat, mother, Dorothy Clark, brother Gary Fowler (Barbara), son, Matthew Wallace Fowler (Millina), granddaughter Journey, step-daughters Stacey Kearney (Devin), and Rachael Haubner. Randy served in the U.S. Air Force from 1979 to 1983 then “jumped ship” to join the Marines where he served from 1987 to 1993. Randy was a veteran of the first Gulf war in the siege of the Kuwait Airport and then again in Somalia Africa in the battle of United Nations UNOSOM l. During his military tenure he was selected to march in the National Honor Guard in Washington D.C. at the distinguished 8th and I, the oldest active post in the Marine Corp. Randy was a running enthusiast, beginning his running career at Evans High School in Orlando, FL. He took his running career to the Air Force then later in life shared his passion with high school students as head coach for the Cross Country and Track Program at Mercy High School, an all-girls private school in Baltimore, MD. While at Mercy High, Randy was named the conference Coach of the Year in 2001 and again in 2004 after leading his runners to the IAAM Championship. In 2005, he became the Cross Country and Track head coach at Calvert Hall College, a private all-boys private high school in Baltimore. He coached Calvert to the MIAA Conference Championships in 2008 and 2009. In 2008, Calvert Hall also won the Maryland/D.C. private school invitational and Randy was voted Coach of the Year. Randy taught his students the meaning of perseverance and teamwork. He was known for his “Coach Fowlerisms”, sayings that he used to motivate the students. “If you don’t mind, it won’t matter” “It’s easy to be hard, it hard to be smart” “Everyone is beatable, run like hell.” “You will never drown in your own sweat” “Just believe in yourself as much as I believe in you and everything will be fine.” Viewing to be held Saturday June 19, 2021 from 4-6 PM followed by a service with military honors at Curlew Hills Memory Gardens, 1750 Curlew Rd Palm Harbor FL 34683. A brief reception will be held at Courtyard Marriott, 4041 Tampa Rd Oldsmar, FL 34677 following the service. A celebration of Life will also be scheduled at Mercy High School in Baltimore Maryland

The family of Randy Allen Fowler created this Life Tributes page to make it easy to share your memories.

Send flowers to the Fowler family.