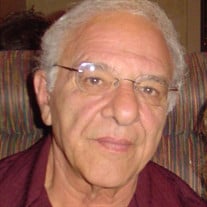 With great sadness and heavy hearts, the Cardone family regrets to announce the passing of our beloved husband, father and grandfather Pio “Peter” Cardone. Peter was born on April 20, 1940 in Jamaica, Queens, New York and succumbed to a long illness on September 10, 2021 at Advent North Pinellas Hospital in Tarpon Springs, FL. Peter is survived by his wife, Marie, of 57 years, and his sisters Jean and Susan. Peter and Marie are long time residents of Florida. They have three sons, Dominick, Peter, and Lenny, and one daughter Marie. Peter shared a long and full life with his wife, children, daughter in laws, son in law and seven grandchildren. He was the rock of the family, a hard working and adoring husband, a mentor to his children and a doting and loving grandfather. Peter was a United States Army veteran and proudly served our Country as a Paratrooper in the 101st Airborne Division, “The Screaming Eagles”. Peter served his community in New York as a Volunteer Fireman in the Franklin Square and Munson Fire Department, achieving the rank of Lieutenant in the Hook & Ladder Co. and was a member of the Franklin Square and Munson Exempt Association. A truck driver by occupation, and although retired, he has been a proud member of The International Brotherhood of Teamsters Local 282 for more than half a century. Peter was a lifelong fan of the New York Yankees and an overall sports enthusiast. A well liked member of his community in Palm Harbor Florida, he served on the board of his Homeowners Association. He enjoyed spending time with his grandchildren, home improvement projects, reading The New York Post, listening to Doo Wop music, and dining out with his wife, Marie. At the age of 81, Peter has been called home to Heaven to be with his parents Angelina and Domenico, and his brothers John and Benny. We love you, we will miss you….until we meet again.

With great sadness and heavy hearts, the Cardone family regrets to announce the passing of our beloved husband, father and grandfather Pio &#8220;Peter&#8221; Cardone. Peter was born on April 20, 1940 in Jamaica, Queens, New York and succumbed... View Obituary & Service Information

The family of Peter Cardone created this Life Tributes page to make it easy to share your memories.

With great sadness and heavy hearts, the Cardone family regrets...

Send flowers to the Cardone family.