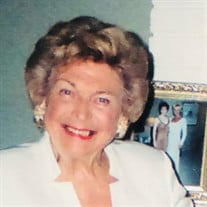 With a broken heart, Deanna Dys, announces that her mother Peggy, 94, passed away on March 24th, 2021. Peggy went to the hospital on February 26th and required emergency major abdominal surgery the following day. She fought like a trouper with... View Obituary & Service Information

The family of Peggy J Dys created this Life Tributes page to make it easy to share your memories.

With a broken heart, Deanna Dys, announces that her mother Peggy,...

Send flowers to the Dys family.