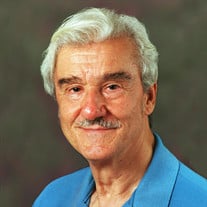 MUSKOVAC, Nicholas G., 91, of Palm Harbor, passed away Nov. 9, 2021. He is survived by his sweetheart Ann Browne, and by his sons, Matthew (Zorrie), Michael and Mark Muskovac; his daughter, Marcia (Rich) Bolick; grandchildren, Sarah, Amy and Megan. His brother John predeceased him. He was the son of Croatian immigrants who settled south of Pittsburgh. Uneducated immigrants couldn’t get good jobs, but they got by, his father was a coal miner. He grew up in a one-bedroom house. They had a large garden and raised chickens and pigs to help put food on the table. He would listen to Pittsburgh Pirates baseball games on the radio with his father. He served in the Navy at Guantanamo Bay, and in the Mediterranean on the aircraft carrier Midway. He maintained airplane drones used for target practice. After the Navy, he worked in a machining factory and went to night school to get his Bachelor of Science in Electrical Engineering degree. He also had a minor in Mathematics. He worked at Vectrol (later sold to Westinghouse) for his entire engineering career, designing industrial power controllers. He has 17 patents. His interests were golf, travel and photography. He was a longtime member of the Suncoast Camera Club and the Photographic Society of America. He held high honors in both. He loved sports, and although he was a lifetime fan of Pittsburgh teams, he was also a fan of the teams of the areas where he lived. For the last 35 years his constant companion has been Ann Browne. They travelled extensively; they enjoyed American National Parks and cruises. He was mentally active until the end, solving Sudoku puzzles, writing books and magazine articles. The funeral is Saturday, November 20th at Curlew Hills Funeral Home. Visitation is from 1-2 PM, service at 2 PM. In lieu of flowers, please make a donation to the American Institute for Cancer Research. aicr.org/give

MUSKOVAC, Nicholas G., 91, of Palm Harbor, passed away Nov. 9, 2021. He is survived by his sweetheart Ann Browne, and by his sons, Matthew (Zorrie), Michael and Mark Muskovac; his daughter, Marcia (Rich) Bolick; grandchildren, Sarah, Amy and... View Obituary & Service Information

The family of Nicholas G. Muskovac created this Life Tributes page to make it easy to share your memories.

Send flowers to the Muskovac family.