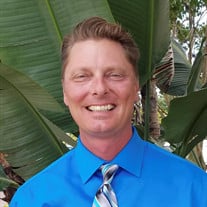 Michael Scot Sipple, 48, went to be with the Lord on January 11, 2021. Michael was born February 16, 1972, in Akron, OH to Robert Sipple and Mary McElwain. He graduated from Oceola High School in 1990 and received his Associate's Degree from St Petersburg College. His heart failed without any warning but he was all heart on this earth. Mike loved everyone, and everyone loved Mike! He had an incredible zest for life and lit up the room with his presence and a huge smile. The holidays were his favorite, and he decorated like none other! Family or friends, young and old, Mike made everyone feel welcome and special to him. He loved music (old school hip hop was his favorite), was an awesome dancer, and would battle anyone if given the challenge. Everyone loved his signature Vanilla Ice performance! He knew every move and word to a T! Mike was a true family man; he absolutely adored his wife and children. Bri and Ty were his pride and joy, and his wife Diana was his very best friend. They worked together for almost 20 years at Consumer Energy Solutions where Mike had a wonderful career in sales, received multiple awards, but most importantly, was loved by all of his co-workers. Always a great storyteller, Mike loved to recall his childhood memories growing up in Ohio with his sister, Teresa, and his high school days in Florida. He stayed in touch with his life-long friends and never missed a beat. He loved his toys including his Camero, Mustang, motorcycle, boats, truck, and golf cart. He even had a "Magic Mike" license plate. Mike had bass in his car before almost anyone. He was a music man and always made sure the tunes were on! Mike was a huge sports fan as he proudly displayed his Ohio State, Cleveland Browns, Tampa Bay Buccanneers, Rays, and Lightning memorabilia and flags at his house. He was always dressed in the appropriate "gear" to cheer on his teams (he had every visor imaginable and wore them all!) Mike WAS the paparazzi! No matter where he went or who he was with, Mike documented everything in pictures. He loved taking pictures and being in them as well. Michael is survived by his wife, Diana of Palm Harbor, Daughter - Brianna, Son - Tyler; Father - Robert Sipple; Mother - Mary McElwain; Brother - Todd Sipple and Family; Sister - Teresa Sipple and her children - Anthony, Caitlin, Cody, and Nicholas. He is also survived by his Uncle - Jack Sipple, Cousins - Jennifer Catalanotto and family, Alan Sipple, Anna Faciana(Sipple) and family, Nick Sipple, Jack Sipple Jr, and many loving in-laws. A funeral service in memory of Michael will be held on Saturday, January 23rd at 10 am, St. Luke Catholic Church, 2757 Alderman Rd, Palm Harbor, burial will follow at Curlew Hills Memory Gardens, 1750 Curlew Rd, Palm Harbor. Celebration of life to follow at HOB Brewing Company from 1 pm to 4 pm, 931 Huntley Ave(Under Pavilion), Dunedin.

Michael Scot Sipple, 48, went to be with the Lord on January 11, 2021. Michael was born February 16, 1972, in Akron, OH to Robert Sipple and Mary McElwain. He graduated from Oceola High School in 1990 and received his Associate's Degree from... View Obituary & Service Information

The family of Michael Scot Sipple created this Life Tributes page to make it easy to share your memories.

Michael Scot Sipple, 48, went to be with the Lord on January...

Send flowers to the Sipple family.