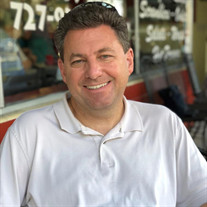 Michael Goode, 60, of Clearwater, FL, passed peacefully at home on October 13, 2021 after a long battle with glioblastoma. Born and raised in Covington, KY in 1961, Michael graduated from Northern Kentucky University and later moved to Florida in 1990. Michael's initial passion for technology began at Simon Kenton High School while attending a computer course. He went on to follow that interest with a long technology career spanning Xetron, Nielsen Media Research, Hitachi Data Systems, and, most recently, IBM. His favorite thing to do was spend time with family - especially his grandchildren. He was also an avid Florida Gators fan. He enjoyed running his weather station and became a certified SKYWARN Spotter for the National Weather Service. Michael served as a deacon at Calvary Church, he will be remembered for his dedication to his family and the Lord. He is survived by his wife of 41 years, Vickie (nee Barnett) Goode; parents, Don and Glenna Goode of Florence, KY,; mother-in-law, Norma Barnett of Palm Harbor, FL; son, Jason (Rachel) Goode of Clearwater, FL; son, Ryan (Megan) Goode of Riverview, FL; daughter, Katelyn (Ethan) Turner of Clearwater, FL; brother, Randy (Stephanie) Goode of Florence, KY; brother, CJ (Danielle) Goode of Leavenworth, WA; and grandchildren, Drew, Jack, Cole, Lyla, and Hannah. His Celebration of Life will be at Curlew Hills Memory Gardens on Wednesday, October 20 with a visitation to begin at 1:00p.m. followed by a service at 2:00 p.m. In lieu of flowers, the family requests that memorial contributions be made to the Moffitt Cancer Center Foundation - Glioblastoma. Donations can be made by mailing a check to Moffitt Cancer Foundation - Glioblastoma, MBC-FOUND, 12902 Magnolia Drive, Tampa, FL 33612; or online at moffitt.org/donate; or by calling 1-800-456-3434 ext. 1403.

Michael Goode, 60, of Clearwater, FL, passed peacefully at home on October 13, 2021 after a long battle with glioblastoma. Born and raised in Covington, KY in 1961, Michael graduated from Northern Kentucky University and later moved to Florida... View Obituary & Service Information

The family of Michael B. Goode created this Life Tributes page to make it easy to share your memories.

Send flowers to the Goode family.