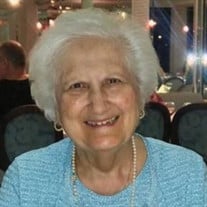 Poniros, Mary P. “Yiayia Maria”, age 88, of Palm Harbor, peacefully passed away on November 12, 2020, surrounded by her loving family, laughter, and music. Born on August 25, 1932, in Weirton, West Virginia, and moved to Detroit, Michigan, at age 15, she never forgot her West Virginia roots and loved the song “Take Me Home Country Roads.” She also paid tribute to her Detroit upbringing with a deep appreciation of Motown music, especially Aretha Franklin and Diana Ross and the Supremes. She is survived by her devoted daughter and son-in-law, Despina and Bill Catsikopoulos; her beloved grandchildren, Stephanie, Maria, and John Catsikopoulos and his wife, Dr. Lauren Evanovich; her cherished sister and brother-in-law, Cally and Adam Angelas; and her special nieces and nephews, Peter and Gina Angelas and Anita and Dino Kondyles; and many great-nieces and nephews. Maria was predeceased by her loving and devoted husband of almost 62 years, Panagiotis “Pete”; and her parents, Theodore and Angero Spethogianis. Maria lived her life devoted to her family, her Greek Orthodox faith, and her community. She volunteered for 25 years at Providence Hospital in Detroit and for 15 years at Helen Ellis Hospital in Tarpon Springs. She taught Sunday School for 20 years in Detroit and was a proud member and past President of Philoptochos in Detroit and in Clearwater for more than 50 years. Her favorite volunteer work was as a Camp Counselor at the Greek Orthodox Summer Camp in Rose City, Michigan. She was also a member of her church’s Sewing Social and of the Chios Society of Tampa Bay. Maria greatly valued education and received an Associate of Arts degree in Education from Oakland Community College, the same year she became a grandmother. Maria’s kind and loving personality attracted many friends, along with her wit and sparkling sense of humor, and was the Queen of one-liners. Her granddaughter Maria would often quote her wit on Facebook and she attracted a large Facebook following for her humor and zinging one-liners. She guided her life by using common sense and following the Golden Rule. Maria never said “Goodbye”, instead preferring to use “See You Soon”. The family will receive friends at 10:00 a.m. on Tuesday, November 17, 2020, at Holy Trinity Greek Orthodox Church in Clearwater, with Funeral services immediately afterward, and burial to follow at Curlew Hills Memory Gardens. In lieu of flowers, the family requests that donations be made to Holy Trinity Greek Orthodox Church Capital Campaign – Interior Fund or to Suncoast Hospice. She will be greatly missed by all who loved and knew her. See you soon Yiayia Maria!

The family of Mary "Maria" Poniros created this Life Tributes page to make it easy to share your memories.

Send flowers to the Poniros family.