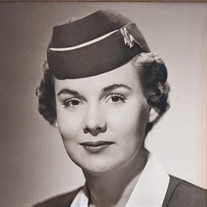 Mary "Dee" Blankenship Croker was a wonderful wife, mother, grandmother, great grandmother, daughter, sister, aunt and friend. She passed away on January 18th, 2022 at the age of 93. She was the 7th of 8 children born to Jackson Blankenship and Elsie Buffaloe Blankenship in Monette, Arkansas on April 22, 1928. A child of the Great Depression and having lost her father at the tender age of 13, she worked hard to expand her horizons and make a difference in the world around her. After graduating from high school in Black Oak, Arkansas, and a short stint at teaching school, she pursued her dreams by becoming a stewardess at American Airlines during the booming age of commercial air travel. It was an exciting time for her as she traveled all over the United States and visited many of the places she had only read about, including Boston, New York, Chicago and San Francisco. After becoming a supervisor, based in Dallas at the American Airlines headquarters, she met the love of her life, Charles (Chuck) Croker, a dashing USAF pilot who persisted until she would agree to a date. After a game of "Around the World Putt-Putt Golf'' she was hooked! Dee and Chuck really got to know each other during a long distance courtship by mail while Chuck was deployed in Korea, and upon his return in 1955 they married. Their first stop was Fort Lewis in Tacoma, WA where their first child, Charles Kimberly, was born. Two years later they welcomed their daughter, Cynthia Leigh, at George Air Force Base in Victorville, CA. Dee's dream of seeing more of the world came true again when Chuck was stationed in Bitburg, Germany, followed by Marina Di Grosetto, Italy and finally Frankfurt, Germany over the next 3 years. Dee loved learning about the different cultures and exploring the old ruins and castles every weekend. After returning from their European tour in 1962 they settled in Akron, OH where Chuck taught ROTC at the University of Akron and their third child, Patrick Scott was born. They stayed put for almost 6 years, and developed many close friendships in Akron as Chuck was again deployed for two back-to-back tours of duty in Vietnam. When he returned they moved once again for a quick, one year, stop in Abilene, TX at Dyess Air Force Base before Chuck moved on to the Pentagon in Wash. DC. During the 3 years they lived in Alexandria, Va. they were both in training for a diplomatic post which included, among other things, Dee and Chuck learning to speak French. In 1972 they packed up the family and headed to Rabat, Morocco, where Chuck was the Air Force Attaché at the American Embassy. Dee hosted and attended countless diplomatic functions, in addition to joining and ultimately heading up the American Women's Club in Rabat, again making lifelong friends in the process. She took the role of the wife of a diplomat seriously and excelled at it. Dee loved the Moroccan people, the culture and the cuisine. She enjoyed traveling all over the country as well as to Portugal, Spain and Greece during their three year tour. After Chuck retired from the Air Force in 1976 and they built their dream retirement home in Palm Harbor, FL Dee returned to the workforce, where she actually received a paycheck for her efforts! She was the Executive Director of the Clearwater Bar Association for 20 years, retiring at the age of 70. In addition to producing the monthly newsletter and coordinating all their events and conventions she also developed a system to promote and more effectively utilize their pro bono program to ensure access to legal services for the less fortunate. Her job also entailed traveling to many parts of the country for conventions, meetings and conferences with Dee dragging Chuck along for the ride and satisfying her never-ending itch to travel and experience new places. Dee was a wonderful mother to her three children and was always available for them throughout her very active life. She encouraged them to work hard to achieve their dreams and led by example. Her home was always open to everyone and she was the ultimate hostess. After Chuck passed away in 2005 she continued to live in their home in Florida and enjoy the companionship of her many friends there until 2012, when she moved to Texas to be closer to her daughter, Leigh. She was "Nona" to her four granddaughters, Megan, Hayley, Claire and Stephanie, enjoying watching them grow up to become successful and confident young women. She was very forward thinking for a woman of her generation and inspired in them a sense that they could achieve anything they set their minds to. She was so proud of each of them. Nona was particularly happy that she moved to Texas in time to welcome the arrival of her great-granddaughter, Finley, in July of 2019. Dee was predeceased by her husband, parents and all of her siblings and their spouses. She is survived by her sons, Charles K. Croker (Patti), and Patrick Scott Croker; her daughter, Cynthia Leigh McSwain (Guy); her granddaughters, Megan Grogan (James), Hayley McSwain (Alex), Claire Robinson (Grant) and Stephanie Croker; her great-granddaughter, Finley Grogan, and numerous nieces and nephews and their families. Dee (Nona) will be missed by the many people she touched in her life, but we take comfort in knowing that she is now in a more peaceful place, reunited with Chuck (Pop-Pop) and keeping watch over all of us, as always. She will live forever in our hearts.

Mary "Dee" Blankenship Croker was a wonderful wife, mother, grandmother, great grandmother, daughter, sister, aunt and friend. She passed away on January 18th, 2022 at the age of 93. She was the 7th of 8 children born to Jackson Blankenship... View Obituary & Service Information

The family of Mary "Dee" Croker created this Life Tributes page to make it easy to share your memories.

Send flowers to the Croker family.