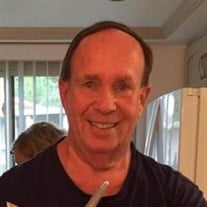 Martin Mitchell McDermott Martin Mitchell McDermott, “Marty ,” 69, died on November 7, 2020 in Clearwater FL. A service will be held at Curlew Hills Memory Gardens, 1750 Curlew Road, Palm Harbor, Florida on December 5th, opening at 10:30 AM with the service starting at 11:00 AM. Marty was born on May 13, 1951 in the Bronx, NY to Martin J. and June McDermott. Marty enjoyed his childhood in the Bronx especially playing street games. A favorite interest of his was rock and roll music which he enjoyed playing and keeping track of on the Billboard charts. Marty played bass guitar in a neighborhood rock band. He was a member of Troop 106 of the Boy Scouts, achieving the status of Eagle Scout. After marrying his high school sweetheart, Christine (“Chris”) Farrell McDermott, Marty and Chris lived in Tarrytown, New York before settling down in their first home in Putnam Valley, New York . Marty vacationed every summer at Lake Luzerne, NY, a place which was very dear to him. Marty worked for many years for the Grand Union Company and later worked for the A&P , prior to retiring and relocating to Clearwater FL , where he and Chris have enjoyed years of leisure. Marty was predeceased by his parents, as well as by his brother, Thomas Michael McDermott (Marilyn Healy). He is survived by his wife, Christine, son , Matthew Farrell McDermott, brother, William “Bill” (Doris) McDermott, sister, Ellen (Dennis) Molloy, as well as in-laws, cousins, nieces, nephews, great nieces and great nephews. Appropriately, one of Marty’s favorite lyrics was “And in the end, the love you take is equal to the love you make.” In lieu of flowers, the family would appreciate donations be made to The Hospice Foundation of America.

The family of Martin M. McDermott created this Life Tributes page to make it easy to share your memories.

Send flowers to the McDermott family.