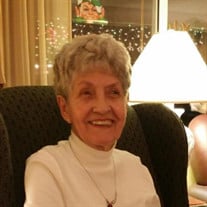 Martha J. Sewart, 97, of Clearwater, Florida, passed peacefully in her sleep June 1, 2021. Martha was born December 29, 1923, in Norwich, Connecticut to Dutch immigrant parents Martha Nijholt and Willem Adams, both of Oosterbeek, Netherlands. Martha lived her life fully – a trick rollerskater, a single-engine airplane pilot, an enthusiastic Swing-style dancer, a retail supervisor with unending energy, a dedicated wife, mother, grandmother with up to two “great” prefixes. She was an avid seamstress, crocheter, and knitter, always creating gifts for her family. Martha was ever fond in her later years of watching golf, ceaselessly assembling jigsaw puzzles, savoring sweets like chocolate-covered macadamias and butter pecan ice cream, replaying Lawrence Welk reruns, and enjoying the company of family. Martha was preceded in death by first husband Peter Cloutier in 1973 and second husband James “Al" Sewart in 2007. She is survived by a brother, William Adams of Norwich, Connecticut; a daughter, Carol Veltry of Clearwater; step-children Roy and Brad Sewart and Kathleen Durbin; three grandchildren and seven step-grandchildren, as well as multiple great grandchildren and great-great grandchildren. What you leave behind is not what is engraved in stone monuments but what is woven into the lives of others. —THUCYDIDES In Lieu of Flowers, the family asks that you make a donation in Martha's name to Suncoast Hospice.

The family of Martha J. Sewart created this Life Tributes page to make it easy to share your memories.