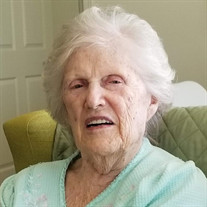 Marion E. Miros, 94, of Clearwater, Florida, passed away from natural causes on January 9, 2022, just days after her beloved Walter had left her. She was born in Staten Island, NY, in July 1927 to the late Louis and Agnes (Brady) Giles, where she grew up. Marion met the love of her life at a skating rink in Jersey City, NJ. As Walter told it, Marion spotted him, and as he passed by, she put her foot out to trip him. It was love at first sight. They married in 1949 and settled in Sayreville, New Jersey. After raising her four children to their teens, Marion chose a career with the NJ Turnpike Authority in the Human Relations Department. She and Walter retired in 1987. Marion loved to exercise and dance. She spent many an afternoon following Jack LaLanne and American Band Stand, then later to aerobics for many years. With Walter, they loved to dance the Polka with energy, and enjoyed the sun, sand, and water of the ocean beach, which eventually led them to retirement in Tarpon Springs, Florida. Marion was an expert quilter, becoming a lifelong member of the Quilter's Crossing Club, making many exquisite creations for her children and grandchildren. She possessed a passion for Mahjong and spent her retirement years belonging to groups and playing with her dear friends. Walter and Marion volunteered for many years into retirement as ushers with The Straz Center in Tampa, Florida, and Clearwater's Ruth Eckerd Hall. There they enjoyed seeing all the Broadway shows, well-known singers and dancers they passionately loved. One of her favorites was Harry Connick Jr. Marion had a quick wit, and if you listened closely, you would catch her tongue-in-cheek humor. She was a voracious reader and could get through several books a week, actively exchanging books with one of her grandsons. Most significantly, Marion loved all her children, grandchildren, and great-grandchildren and was proud to share with others the achievements they each had. She never missed a graduation or a particular achievement ceremony, whether from kindergarten, grammar school, high school, college, or military. Married nearly 73 years, Marion recently lost her husband, Walter Sr. on January 1, 2022. She is survived by her loving daughters and son, Walter T. Miros, Jr., Diane Pinder Koshinskie (Robert), Debbie deHaas (Christopher), and seven grandchildren, Dean Miros, Walter T. Miros, III, Elizabeth Dailey, Thomas Pinder, Andrea deHaas, Nicholas deHaas, Monica deHaas, and two great-grandchildren, Aliyah Merced and Gwyndolen Bowman, and other extended family members. Interment will be privately held in Sacred Heart Cemetery, Sayreville, New Jersey, alongside her husband and beloved daughter Donna, who predeceased her in 1972. In place of flowers, memorial donations may be made to Duke Cancer Institute Cancer Fund at https://www.gifts.duke.edu/dci?technique_code=CCCWBDNN.

Marion E. Miros, 94, of Clearwater, Florida, passed away from natural causes on January 9, 2022, just days after her beloved Walter had left her. She was born in Staten Island, NY, in July 1927 to the late Louis and Agnes (Brady) Giles, where... View Obituary & Service Information

The family of Marion E. Miros created this Life Tributes page to make it easy to share your memories.

Marion E. Miros, 94, of Clearwater, Florida, passed away from...

Send flowers to the Miros family.