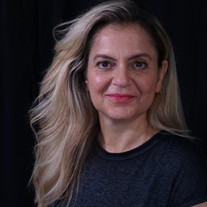 Maria Bakkalapulo, an ethnomusicologist, filmmaker, and journalist whose life's work was largely dedicated to documenting music and cultural events around the world, died on Friday, January 22nd, in Houston, Texas, where she was in treatment for an aggressive cancer. Most recently based in Miami, although she lived in various points around the world, Maria wrote about, recorded, and photographed events in locations as varied as Indonesia, Malaysia, Scotland, Cuba, and the United States. Passionate about documenting indigenous music of the world, she also wrote stories that delved into the lives of the people in those countries, touching upon the joys and the challenges that bring us together as one human race. Maria reflected what all of us strive to be — honest, compassionate, joyful, and loyal to our friends and family. Whoever knew her, whomever she touched, whether it was for a few moments or for a lifetime, she left us with a smile and a positivity unique to Maria. Not one to ever complain, Maria kept her medical challenges largely private. So, this tragic news of her death came as a surprise to many. She was 50 when she was taken from us. Maria spent the past year determined to defeat a new adversary in a life of medical challenges that began at age 11, when she had her first kidney transplant at the University of Minnesota Hospital by Dr. John Najarian, a pioneer transplant surgeon. She lived a full and vibrant life while also spending time in and out of hospitals, with kidney transplants from her mother, brother, and two cadavers. Nobody except her family members and closest of close friends knew the incredible challenges that she overcame to live the life she chose. Maria was born in Stanford, Connecticut, the child of Fotini (Tina) and Konstantin Bakkalapulo, the youngest of the siblings to Louie, Anastasia, and Paul. The family was incredibly close and part of the Greek Orthodox communities wherever they lived — including Ridgefield, Connecticut; Overland Park, Kansas; and Dunedin, Florida, where Maria graduated from Dunedin High School. Maria went on to attend Florida State University in Tallahassee, where she majored in sociology and communications. Starting her career in music as a host and producer of her own world music program at WVFS Tallahassee, Maria moved to New York City to work as a publicist for Peter Gabriel’s global music label, Real World Records. A few years later, she decided to go east — the Far East — to branch out as a freelance journalist, first documenting Hong Kong’s territorial handover from British to Chinese rule. Soon after, she traveled to Thailand to produce an in-depth story about the disappearing traditional music of its northern hill tribes. Maria continued her education at the University of London’s School of Oriental and African Studies (SOAS) and received a master’s degree in ethnomusicology. She returned to New York City where she worked at Sounds of Brazil (SOB's), a popular world music venue in lower Manhattan. She then returned to Asia, and her world traveling, as an independent journalist living in Bali, Indonesia. It was on a trip to the Rainforest World Music Festival in Borneo where she met her husband, Niall Macaulay, a sound engineer at various large-scale outdoor festivals around the world. Their relationship began at a distance, with him returning to Scotland and her to Bali. They were early adopters of Skype and the digital generation of relationships. Meeting again at the music festival in Borneo, Niall proposed to Maria at the end of the show in front of the stage that symbolized their shared love of music and performance. They were loving partners not only in their personal lives, but also became a creative and technical team. The two were inseparable, and their lives were as close as two human beings could be. Among the many projects they worked on together was the acclaimed documentary Street Punk! Banda Aceh, released in 2016. This inspiring film reveals how young people are striving to express their identities and fight for freedom in the face of religious and cultural oppression. Other projects that Maria has produced include a film about veterans hunting the invasive Burmese pythons in the Florida Everglades, Miami’s Little Haiti, musicians who survived the Khmer Rouge, body percussion from Banda Aceh, kite flying in Bali, Sierra Leone's Bubu King, sacred music of Bali, and so many more, which can be enjoyed through her website Vandaluna Music . Maria contributed to the BBC, MTV Iggy, Noisey / VICE, The World (BBC/ WGBH-Boston), CBC, NPR, National Geographic Music, Songlines magazine, Time magazine, The Wire magazine, Marketplace, Miami New Times, Going Places (Malaysia Airlines), Rolling Stone, and other outlets. Maria is now with her beloved father, Kosta. A private viewing and funeral will take place on Friday, January 29, at 10 a.m. at Holy Trinity Greek Orthodox Church in Clearwater, Florida. The family would like ask those near and far to join them via Live Stream at that time. The Internment will be held following the Funeral at Cycadia Cemetery, 1021 E. Tarpon Ave, Tarpon Springs, Florida. In lieu of flowers, donations may be made in Maria's memory to the Holy Trinity Greek Orthodox Church Iconography Fund and Kintamani Bird Stage Fund in Sarawak, Malaysia. (These two funds were lovingly set up in memory of what was so important in Maria's life: her faith in God and her immense love of the World's music.) For friends and family who would like to watch Maria's service via Live Stream, please visit Holy Trinity Greek Orthodox Church website at https://www.htclearwater.com/

Maria Bakkalapulo, an ethnomusicologist, filmmaker, and journalist whose life's work was largely dedicated to documenting music and cultural events around the world, died on Friday, January 22nd, in Houston, Texas, where she was in treatment... View Obituary & Service Information

The family of Maria Olga Bakkalapulo created this Life Tributes page to make it easy to share your memories.

Send flowers to the Bakkalapulo family.