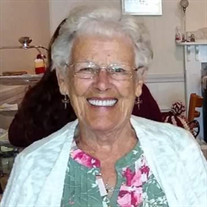 Margaret McIlhone Kennedy, 89, of Dunedin, Florida, passed away at home on June 4, 2021, following a brief illness. Her three children were there at her side. She was born on November 1, 1931, in Renton, Dunbartonshire, Scotland to her loving parents, the late James and Agnes Ronald. Margaret met her future husband, Tommy Kennedy, when she was 21. They got married on March 21,1953, and went on to have two children over the next eight year period. In 1963, they decided to move their young family to America, and Passaic, New Jersey became their new home, and birthplace of their third child. It wasn't long after, that Margaret reunited with her mother, mother-in-law, sister and family, and brother-in-law and family, who also immigrated over from Scotland, and were now living just a stones throw away from one another. In 1987, Tommy and Margaret were drawn toward the warmer climate that Florida offered, and settled in the beautiful Scottish community of Dunedin. It ultimately became their forever home where they now got to enjoy the laid back beach life, but it's also where they experienced the joys of becoming grandparents and great-grandparents. They continued to cherish their time visiting with family and friends who were living state side and abroad, and especially enjoyed being together with with Mattie and Jim, Marshall and June, Nan and Gordon, Letty and Texie, Billy, Edith, and Bunty and Steven. In total, Tommy and Margaret were blessed with 64 wonderful years of marriage and family. Margaret loved to cook, bake, and host large family gatherings on the holidays. Her consistent ability to flawlessly coordinate a delicious feast, mixed with her warm hospitality and incredible attention to detail from arranging beautiful table settings to her home decor, put the " top rated TV shows and magazines" to shame. She spent many years working in the food industry, and was fondly known by all of the students and staff as one of the friendliest lunch ladies at Dunedin High School. Although she retired at the age of 74, the wonderful friendships she had developed with her fellow co-workers remained true for a span of more than thirty years. She especially looked forward to her weekly shopping trips and lunch with Flo, her most dearest friend of all. Margaret was passionate about keeping her Scottish heritage alive through her long standing affiliation with the Daughter's of Scotia, and the Scottish American Society. She would gladly volunteer to serve up Scottish meat pies at the annual Dunedin Highland Games, and proudly supported the Dunedin Highland Bands and dancers. Her heart never strayed far from her beloved Scotland. She had been an avid reader all of her life, and continued to keep her mind razor sharp by doing daily crossword puzzles. Margaret may have only stood at 5 five feet tall, however her high spirit and straight forwardness definitely made her a force to reckon with. Because she was so fiercely independent and hard working, she easily gained everyone's respect and admiration, and her fun loving and quick witted personality made her someone who people just loved to be around. Her greatest personal attribute of all, however, was her ability to demonstrate her selfless love, affection and kindness to all of her family and friends. She will be sorely missed. Margaret is survived by her three children, son Thomas and wife MaryAnn of Belle Isle, Florida, daughter Lorraine and husband Dale of Gallatin, Tennessee, son Robert and wife Kelly of Dunedin, Florida, her younger brother Steven of Gibraltar, her three grandchildren, William, Addison, and Fiona, her three great-grandchildren, Kieran, Vivian and Christopher, her nephews Ronald, Stewart, Kenneth and Brian, and her niece Lesley. She is preceded in death by her loving husband Tommy, her sister Martha, and her first born grandchild Victoria. In lieu of flowers, please consider making a donation in Margaret's memory to either the American Cancer Society or Suncoast Hospice

Margaret McIlhone Kennedy, 89, of Dunedin, Florida, passed away at home on June 4, 2021, following a brief illness. Her three children were there at her side. She was born on November 1, 1931, in Renton, Dunbartonshire, Scotland to her loving... View Obituary & Service Information

The family of Margaret Kennedy created this Life Tributes page to make it easy to share your memories.