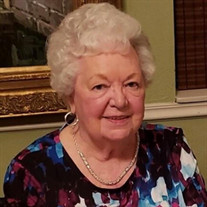 Margaret Stirling (Caughie) Beavers Copland, resident of Clearwater, FL died peacefully on January 24, 2021 after a brief illness. Margaret was born in Philadelphia, PA on March 7, 1929 to Alexander and Mary Caughie. Margaret was married to Robert W. (Bill) Beavers in 1948 and during their long marriage they raised three children. After the death of her husband Bill in 1990, Margaret married Hamish M. Copland in 1997. Margaret is survived by her daughter, Mary Lee Dichtel, her husband Robert J. Ursano; twin children Margherita Rader and Bill Beavers and his wife Debra Beavers; brother John G. Caughie; two nieces, four nephews, six grandchildren and seven beautiful great grandchildren with another great grandchild due in March 2021. Margaret was predeceased by both Bill Beavers and Hamish Copland, her brothers ‘Wee Alex’ Caughie and Robert G. Caughie and her sister, Alice (Caughie) Yates. During her life as a Navy wife, Margaret lived in many locations in the United States as well as in Rome, Italy and Gourock, Scotland. She moved to Dunedin, FL in 1974 and since that time has lived in the surrounding area. Margaret embraced her Scottish heritage and was an active member of Daughters of Scotia Lodge #255 in Dunedin, FL. Over the years, she held a variety of DOS lodge positions including Chief Daughter. Margaret’s passion in life was music. She became a member of her church choir at a young age and continued to participate in church choirs throughout her life. Margaret was a member of St. Alfred’s Episcopal Church, Palm Harbor and sang in their choir for many years. In addition to her beautiful soprano voice, Margaret played the piano and organ, and served as an interim organist at two parishes. When she lived in the D.C area, Margaret was a member of the Choral Arts Society of Washington, D.C., whose home base is the Kennedy Center for the Performing Arts. Due to the current COVID pandemic, a memorial service will be held at a later date. In lieu of flowers, charitable donations may be made in Margaret’s memory to: St. Alfred’s Episcopal Church Music Ministry with a check payable to St. Alfred’s Episcopal Church, 1601 Curlew Road, Palm Harbor, FL 34683 with ‘Music Fund’ indicated in the check memo line or a donation may be made directly online at http://www.staflredschurch.com. Click on the GIVE tab; on right side of this tab, there is a drop-down arrow to select ‘Music Fund’. A memorial donation may also be made to the charity of your choice.

The family of Margaret Stirling Copland created this Life Tributes page to make it easy to share your memories.

Send flowers to the Copland family.