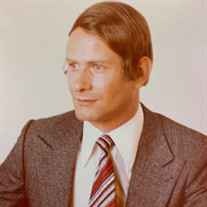 On Thursday, April 1st, 2021, Manfred H. Beck, loving husband, father of two children, and Grandfather to three, passed away at the age of 78. Manfred was born on February 18th, 1943 in Tegernsee, Germany. A proud Bavarian, he received his Diplom Volkswirt (Master’s of Business Administration) from the University Munich. In 1970, he married Brigitte Beck and volunteered to be transferred to Trois-Rivieres, Quebec, Canada by his company in 1976. In 1979, he and his wife moved to Niagara Falls, New York where they raised two children, Andreas and Sabine. As of his retirement in 2008, Manfred was President of Stollberg Inc., American Division. After retirement, Manfred permanently moved to Palm Harbor, Florida in 2017. An all-around fun guy to be around, Manfred would never miss an opportunity to celebrate special occasions, enjoy life with friends, dance or dress up for a party, or offer a glass of red wine to neighbors on his patio. As a world traveler Manfred loved the thrill and excitement of visiting other countries. Some of the countries he visited included, but are not limited to, India, China, Japan, South Korea, Brazil, Peru, Egypt, Cuba, Spain, France, Italy, Greece, Turkey, Austria, Poland, England, Ireland as well as extensively throughout the United States, Mexico and Canada. Manfred had a passion and truly unique understanding of history. Traveling to ancient sites around the globe such as the Pyramids of Giza, Machu Pichu, Palace of Knossos, the Greek Acropolis, Roman Colosseum and Teotihuacan gave him truly unique insights into humanity and culture. Always up for a good conversation, he would be able to discuss and debate intricate details of almost any culture. A collector at heart, Manfred absolutely loved antiques and collectables. He genuinely enjoyed being a part of a community of fellow enthusiasts for his latest passion, and of course, the fun of the negotiation. While his collections over the years changed, his passion for Biedermeier Glass never wavered. As an avid golfer, Manfred was famous for using his 2 Iron. He had the distinct privilege of playing several of the finest PGA courses on earth including St. Andrews, Pebble Beach, Oceans Course, Torry Pines, Copperhead and Oakmont, to name a few. Additional passions of Manfred included watching the Olympics, bidding on eBay, keeping up on his favorite stocks, fine art, sculpture, and of course as a proud Bavarian, King Ludwig. Manfred’s family was his biggest priority and joy. Raising his children in the best way possible and being a positive role model was more than important to him. The success of his children was his success and gave him his biggest sense of accomplishment, pride and joy. Manfred is survived by his wife Brigitte, his two children, Andreas and Sabine and his grandchildren Isabel, Natalie and Andrew. He will always be in our hearts.

On Thursday, April 1st, 2021, Manfred H. Beck, loving husband, father of two children, and Grandfather to three, passed away at the age of 78. Manfred was born on February 18th, 1943 in Tegernsee, Germany. A proud Bavarian, he received his... View Obituary & Service Information

The family of Manfred H. Beck created this Life Tributes page to make it easy to share your memories.

Send flowers to the Beck family.