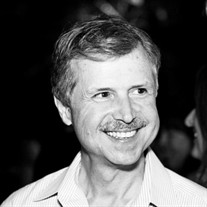 Izquierdo, Luis Samuel, 65, of Palm Harbor, passed away on November 22, 2020 of Cancer. He was born in Santiago, Chile on April 21, 1955, to Luis A. Izquierdo Umejola and Paulina Dela Sotta Errazuriz. He moved to Hollywood, California and shortly after moved to Pacific Palisades, California in 1970. He met and started dating his wife Vicki in 1978 and married in 1983. He graduated from Cal State Northridge with a Bachelor of Science in Mechanical Engineering then University of Southern California with a Master of Science in Mechanical Engineering. He worked for Hughes Aircraft Company from 1986 till 2000 then Raytheon Technologies from 2000 till his retirement in 2013 ascending to Vice President of Missile Systems, Operations. He is proceeded in death by both parents. He is survived by his wife, Vicki, daughters Chelsea Fazioli (Joseph Sr.) and Alexandria Preston (Trevor) and 4 grandchildren: Haydn Preston, Gracie Fazioli, Joseph Fazioli Jr., and Willow Preston. He is also survived by his sisters Paulina Bacigalupo (Felix) and Caroline Izquierdo, and many family members and friends. Luis was an amazing person. He was incredibly selfless and loved his family and friends very much. He was the best husband, father, grandfather and friend. His smile and infectious personality would light up every room that he was in. He enjoyed playing the violin, traveling, taking out their RV and boat and living life to its fullest. He loved dogs and helped his wife get s nonprofit 501c3 called No Dog Forgotten Inc. running that helps save shelter dogs. The world lost a great man and person and he will be missed by many. The family will be receiving family and friends 12:30 p.m., Sunday, May 16th, at Curlew Hills Memory Gardens Funeral Home, 1750 Curlew Road, Palm Harbor, FL 34683 with reception to follow at Lansbrook lakefront pavilion. In Lieu of Flowers, donations may be made to the American Lung Association.

Izquierdo, Luis Samuel, 65, of Palm Harbor, passed away on November 22, 2020 of Cancer. He was born in Santiago, Chile on April 21, 1955, to Luis A. Izquierdo Umejola and Paulina Dela Sotta Errazuriz. He moved to Hollywood, California and shortly... View Obituary & Service Information

The family of Luis S. Izquierdo created this Life Tributes page to make it easy to share your memories.

Izquierdo, Luis Samuel, 65, of Palm Harbor, passed away on November...