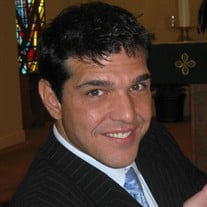 With a heavy heart and great sadness, The Cardone family regrets to announce the passing of our beloved Son, Brother and Uncle Leonard “Lenny” Cardone. Lenny was born February 13, 1971 in Franklin Square, New York and suddenly passed away on September 8, 2021 in Ft. Myers, Florida. He spent his youth in New York and after High School moved to Arizona to attend Arizona State University where upon graduation as a Civil Engineer, spent a majority of his adult life. After the passing of his beloved wife Vanessa, and the loss of his fearless sidekick, his Rottweiler Penelope, he relocated to Florida to be closer to his parents and younger sister, and closer to his happy place, the beach. Lenny came into this world with all the energy and vitality a bright and precocious child can bring. Having Lenny in your life meant there was never a dull moment. He was the apple of his mother’s eye, a side kick to his older brothers, and a best friend to his little sister. A natural athlete, he excelled in every sport he attempted. Throughout his life he played baseball, lacrosse, soccer, football and ice hockey. He even earned a spot as a walk-on for the Arizona State Sun Devils football team during college. He was a lover of animals and Classic Rock. A devoted son and brother, a friend and mentor to so many and the best uncle any kid could ask for. Even at the age of 50, he was still a child at heart. At times, Lenny took the road less traveled by many but made his mark no matter who he came across along the way. His huge heart, good looks, charisma and charm won over the hearts of all that met him. He is so loved by so many and will be fiercely missed. God had his reasons to call him home earlier than anyone would want. He is now peacefully resting with his wife Vanessa, his father Peter, his “baby” Penelope, and all those he loved that left before him. May his beautiful memory be forever. We will always love you...Stay Gold Lenny.

With a heavy heart and great sadness, The Cardone family regrets to announce the passing of our beloved Son, Brother and Uncle Leonard &#8220;Lenny&#8221; Cardone. Lenny was born February 13, 1971 in Franklin Square, New York and suddenly... View Obituary & Service Information

The family of Lenny Cardone created this Life Tributes page to make it easy to share your memories.

With a heavy heart and great sadness, The Cardone family regrets...

Send flowers to the Cardone family.