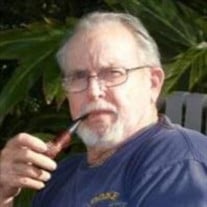 Larry Jackson Calhoun, passed away on January 5, 2022 at the home of his son, Carl Calhoun, in Palm Harbor, FL after a short battle with leukemia. Larry, 94, was born on July 9, 1927 in Decatur, IL, the son of Dr. John C. Calhoun and Julia Jackson Calhoun. Larry was predeceased by his older siblings, Jack Calhoun and Beverly Calhoun Taylor. Larry moved to Ft. Lauderdale in 1935 with his family when he was just eight years old. Larry was married to Bertha (“Billie”) E. Calhoun for 65 years, who passed away in December 2012. Larry and Bertha had four children, Linda J. Ross (Allan), David J. Calhoun (who passed away in 2010), Carl M. Calhoun (Debbie) and Kevin J. Calhoun (Monique). Larry has 10 grandchildren and seven great grandchildren. Larry graduated from Ft. Lauderdale High School in 1945, and then served in the US Merchant Marine during WWII. Later he served 27 years on the Ft. Lauderdale Police Dept, retiring in 1977 as a Major. Larry attended the FBI Academy in 1974. After retiring from the FLPD, he went on to become a high school teacher, teaching criminal justice, while also training a significant number of police officers at the Police Academy. Larry and Billie were always active; weightlifting, hand-balancing and acrobatics in their early years (and Larry continued weight-lifting with his son Kevin, until he was 90), and square dancing and round dancing during their 60s and 70s. Larry was an accomplished artist beginning his early days as a sign painter and later developing his skills painting portraits and landscapes, and many murals around Ft. Lauderdale and Franklin, NC. He also went to John C. Campbell Folk School where he learned to build handmade Windsor chairs. He built a cabin near Franklin in the mid-1960s and enjoyed the mountain life for many decades. One of Larry’s great joys in life was smoking his pipe around a camp fire, having a rum drink, telling ghost stories and listening to old-time music. Larry was an inspiration to all, and a role model to his family. He lived his life with truth, honesty and integrity and had always been our rock. He will be sorely missed by all that were lucky enough to know and be touched by him. A memorial service will be held on Sunday January 9, 2022 at Curlew Hills Memorial Gardens, 1750 Curlew Road, Palm Harbor, FL 34683 where friends may visit beginning at 9:00am. In lieu of flowers, donations may be made to Suncoasthospicefoundation.org.

Larry Jackson Calhoun, passed away on January 5, 2022 at the home of his son, Carl Calhoun, in Palm Harbor, FL after a short battle with leukemia. Larry, 94, was born on July 9, 1927 in Decatur, IL, the son of Dr. John C. Calhoun and Julia Jackson... View Obituary & Service Information

The family of Larry J. Calhoun created this Life Tributes page to make it easy to share your memories.

Send flowers to the Calhoun family.