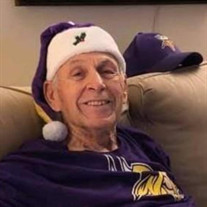 Joseph W. DiGiovanna, Sr., 81, of Palm Harbor, FL, died on December 3, 2020. He was surrounded by his loving family. Joe, son of the late Jasper and Frances DiGiovanna, was born in Springfield, IL, on April 9, 1939. He was raised in Decatur, IL and went to St Teresa High School. He graduated from St Louis University, where he met his wife of 59 years, Adele. Joe and Dellie were married in 1961 and had 3 children, Joe Jr., Cathy and Julie. Joe had a long career with Sears, in addition to other retail ventures. Joe’s retail career brought the family from St Louis, MO to Alton, IL, Columbus, OH, Grand Rapids, MI and finally Plymouth, MN. They lived in Plymouth for 43 years. In 2000, they became snowbirds; in 2016, they became permanent residents of Palm Harbor, FL. Joe was an avid Minnesota Vikings fan. His passion for his beloved Vikings was legendary and could be heard for miles on game days. He was also known for his stories and jokes, which he told with zeal often and freely. He was famous for finding a connection with anyone; it was said he never met a stranger. He loved to sing (loudly)- at parties, around a campfire, on family road trips, and especially at church with the St Bartholomew parish choir in Wayzata , MN and St Ignatius of Antioch parish choir in Tarpon Springs, FL. He spent many summer days on his boat on Lake Minnetonka, and enjoyed being the captain for family and friends. Joe was the life of the party but there was nothing he cherished more than his family. He is survived by his wife Adele, son Joe Jr. and daughter in law Lucy Bosley, daughter Cathy (DiGiovanna) Yaniz and son in law Jim Yaniz, daughter Julie DiGiovanna, 3 grandchildren Emily Yaniz, Jackson DiGiovanna and Matthew Yaniz, sister Joanna Houy and brother in law John Houy, and special friends Mary Ann Dallas and David Johnston. Due to COVID-19, services will be private for immediate family. Future memorial services for cherished friends and family will be held in Minnesota and Florida at a date to be announced. In lieu of flowers, donations to Hospice of the Florida Suncoast or a service charity of your choice are appreciated. Joe was larger than life and will be sorely missed by all who knew him and called him a friend.

Joseph W. DiGiovanna, Sr., 81, of Palm Harbor, FL, died on December 3, 2020. He was surrounded by his loving family. Joe, son of the late Jasper and Frances DiGiovanna, was born in Springfield, IL, on April 9, 1939. He was raised in Decatur,... View Obituary & Service Information

The family of Joseph W. DiGiovanna created this Life Tributes page to make it easy to share your memories.

Send flowers to the DiGiovanna family.