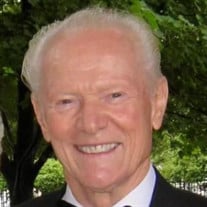 John Geerlings passed away at his home in Dunedin, FL on August 30, 2021. Born in Holland, MI, on November 22, 1926, he graduated from Holland High School in 1945. During his senior year, he enlisted in the United States Navy, and served on... View Obituary & Service Information

The family of John Geerlings created this Life Tributes page to make it easy to share your memories.

John Geerlings passed away at his home in Dunedin, FL on August...

Send flowers to the Geerlings family.