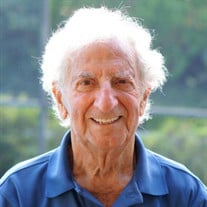 John P. Fiorillo was born in Paterson, NJ on 13 May 1922 as Giovanni Pasquale Fiorillo. He raised his family in Hawthorne, NJ and on retirement moved to Clearwater, FL 25 years ago where he passed away on 16 February 2022. He is survived by his wife of 69 years, Florence and by thier five children Adele Mattson, Valerie Groom, Lynn Zyskowski, Jhone Pavlin, Sy Van Bui, seven grandchildren, Kyle Zyskowski, Thomas Pavlin, Nicole Pavlin, Matthew Groom, Caroline Groom, Amanda Bui, Adam Bui, and and three great grandchildren, Riley Groom, Austin Zyskowski, and Cooper Zyskowski. John was a dedicated husband, loving father and World War II Veteran who served in the PacificTheater as a surgical technician in the U.S Army. He went on to run several successful businesses in his lifetime retiring from his school bus company that transported handicapped children. He traveled around the world with his beloved wife. They had many great adventures together as well as a beautiful family. Even in retirement, John was committed to service by serving in the U.S. Coast Guard Auxillary. Luckily he made friends everywhere he went. He volunteered as a chaplain at Mease, Countryside for 18 years, working for Carelift transporting elderly patients for 18 years. In his late 80's at the time, he would say, "I am driving old people to their appointments." After delivering the last patients, he would always stop for his ritualistic Boston crème doughnut. He and his wife Florence found much enjoyment in bringing their therapy pup GiGi, to cheer up hospice patients. He always lifted up others with his positive outlook on life. He also loved the outdoors and respected nature. He loved to fish and hunt and always valued a packed lunch. "If the fish aren't eating, I am," was one of his mantras. He would never pass up a good day outdoors in the woods. John will truly be missed and remembered by everyone whose lives he touched. Services will be held at Curlew Hills, 1750 Curlew Road,Palm Harbor Florida on March 3rd from 3-5pm, service at 6pm. Interment at Florida National Cemetery, 6502 SW 102nd Avenue, Bushnell, Florida on 1:30pm on March 4th.

John P. Fiorillo was born in Paterson, NJ on 13 May 1922 as Giovanni Pasquale Fiorillo. He raised his family in Hawthorne, NJ and on retirement moved to Clearwater, FL 25 years ago where he passed away on 16 February 2022. He is survived by... View Obituary & Service Information

The family of John P. Fiorillo created this Life Tributes page to make it easy to share your memories.

Send flowers to the Fiorillo family.