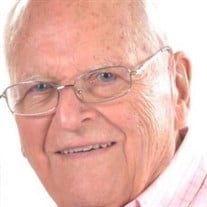 Surrounded by family, John Raymond Denison, 91, of Palm Harbor, Fl and formerly of Barrington, RI passed away peacefully on Monday, November 16th, 2020. He was the beloved husband of Jacquelyn (Pothier) Denison. John was born on September 4th, 1929 in North Providence, RI, the son of the late Thomas Leslie and Mary Elizabeth (Briggs) Denison. John was a graduate of LaSalle Academy in 1948 and a graduate of The University of Rhode Island College of Pharmacy in 1952. After graduating from college, he enlisted in the U.S. Air Force where he achieved the rank of Captain and was a pilot associated with the Strategic Air Command during the Korean War for five years. He was the owner of Admiral Pharmacy in North Providence, RI until his retirement in 1994. John loved sailing, skiing in New Hampshire, books and traveling. However, his greatest love was for his family and his dogs. John is survived by his loving wife of 63 years, Jacquelyn (Pothier), his sister, Joan (Denison) Conway of Palm Harbor, FL, his daughters, Leslie (Bill) Cunha of Palm Harbor, FL and Amy (Michael) Andreozzi of Narragansett, RI , his son, Christopher (Danielle) Denison of Barrington, RI, his grandchildren, Timothy (Caitlin) Cunha, Matthew Cunha, Brooke Andreozzi, Brett Denison and Noah Denison. He was the great grandfather of Avery Jane Cunha. Due to COVID, final arrangements will be delayed.

The family of John Raymond Denison created this Life Tributes page to make it easy to share your memories.

Send flowers to the Denison family.