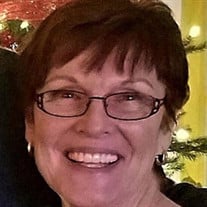 Jody Martin of Palm Harbor, FL joined with God on November 20, 2020 at the age of 71. Jody had fought an 8 month battle with cancer that began in March of 2020 and finally succumbed to the disease while at the Suncoast Hospice Care Center in Palm Harbor, FL. She was surrounded by her family and friends. She was born Barbara Jo Abbott on Jan 9, 1949 at Deadwood, SD to Delores and Robert Abbott, both deceased. Jody attended Franklin Pierce High School in Tacoma, WA where she sang with a group called the Silvertones. Jody graduated in 1967 and then attended Eastern Washington University where she majored in music. In 1968 Jody was selected to be the Intercollegiate Knights Duchess for the year. Jody sang with the Collegians and also with the University Symphonic Choir. Jody’s voice coach was Dr. Ralph Manzo an internationally acclaimed music conductor and instructor. She had a wonderful and lovely voice and would go on to sing songs from Olivia Newton John while performing with a small band for tips in Gig Harbor, WA. It was a very special time and Jody made some very close friends that have remained in touch throughout her life. Since her time at University she continued her love of music as a member the church choir, and as a director of several children’s holiday plays for the church. Jody moved to St. Petersburg, FL in 1975 with her husband Rob Townsend to raise their children. It was a blended family with Ben and Kim from her previous marriage to John Coffey, and Chad, Rob’s son also from a previous marriage. In 1980 she began her career at GTE Companion Services helping to monitor the elderly in case of slips or falls in their homes. In 1986 Jody met her future husband Bill Martin and they married on April 8, 1989 in St Petersburg. Rob and his wife Cindy are now retired and live in the home they built at Lake Panasoffkee, FL. They and their families have been dearest friends throughout the years. In 1991 Jody left Companion Services to open a child daycare center from her home. The children loved her, and she loved and cared for them as her own. There would be crafts and playtime, naps, and storytelling. Jody would celebrate their birthdays and the holidays, and especially Halloween when the children would come in their costumes. Jody gave up her beloved daycare at the end of 1995 due to Bills transfer to Tallahassee. All the memories of that time are filled with joy and happiness, and her enduring love for the children. After returning to the area and moving to Palm Harbor in June of 1996, Jody returned to ADT Companion Services as their customer service manager, she was now responsible for all services and systems nationwide. In 2005 Jody went into the medical billing field. She received her certification as a Medical Coder while working at Advanced Urology Associates in Clearwater, FL. Jody retired in June of 2019 and after a surprise retirement party with her lifelong friends and family, Jody and Bill departed on a well-deserved vacation cruise to Alaska the next month. Jody loved her family and friends and she will be missed dearly. She was the most gracious soul, her kindness and love were boundless and all who knew her loved her. She was true to her friends and always positive, never critical and would find the good in everyone. Jody loved the holiday season and each year every room in the home was decorated to the nines. She loved when family and friends would stop by to visit and all were amazed with her attention to detail. All of us loved to be with Jody at Christmastime and she will be missed by all who knew her. Jody was always strong in her faith in God and it has helped her immensely in these last few months. She is now with God in heaven and she will be our angel watching over us. Jody’s spirit will live on in her children, her grandchildren and their children for generations to come. May she rest in peace. Jody leaves behind her husband Bill of 31 years, her two children and three grandchildren and her younger sister and brother. Her son Ben of Charleston, SC is engaged to Sonya James, also of Charleston, and they will be married on Jody’s birthday on Jan 9th. 2021. Her daughter Kim is a teacher, is married to Ralph Henson and they reside in Clearwater, FL. Jody’s grandchildren are Bryce Henson 22, who just recently relocated to Arlington, VA, Riley Jo Henson, 20, attends Flagler University in St Augustine who will soon be engaged to Harrison Hobbs and plans to be married soon, and Haley Henson, 15, who will be graduating from high school with honors and plans to attend college. Her sister Lynda Kincaid currently lives in Tacoma, WA with her husband Lou, and her brother Bobby Abbott resides with his wife Mary Ann in Warrenton, OR. A Celebration of Jody’s Life memorial service will be held at the Curlew Hills Memorial Gardens at 1750 Curlew Rd. Palm Harbor, FL 34683 on December 12, 2020 at 1 pm followed by her inurnment. Curlewhills.com / 800.944.3433 In lieu of flowers, donations can be made to the American Cancer Society in her name.

Jody Martin of Palm Harbor, FL joined with God on November 20, 2020 at the age of 71. Jody had fought an 8 month battle with cancer that began in March of 2020 and finally succumbed to the disease while at the Suncoast Hospice Care Center in... View Obituary & Service Information

The family of Jody Martin created this Life Tributes page to make it easy to share your memories.

Send flowers to the Martin family.