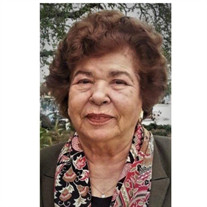 Joann Athanasiou, 90, born May 11, 1930, in Athens, Greece, passed away peacefully on Jan. 16, 2021. An emigree to the United States in 1953, she worked as a seamstress and waited for her beloved husband-to-be, whom she'd met in Greece, to finish his tour of duty as an electrical engineer for the Merchant Marines. Bill joined her in New York City and they were married September 2, 1956. Joann and Bill were inseparable for life. After losing her own father just before she was born and her mother at 22, Joann was determined to forge a happy new life in America with her husband. The couple opened their own fur-finishing business on 7th Avenue in New York City and worked tirelessly to make and design furs for their elite clientele (many of whom, unbeknownst to Joann and Bill, were Hollywood royalty). Soon after the births of their two children, George (1960) and Olga (1965), Joann and Bill began longing for a warmer climate and a business that would allow them to enjoy a more family-centered lifestyle. In 1970, they moved to Clearwater, Fla., where they were founding members of the Holy Trinity Greek Orthodox Church. In 1972, Joann and Bill bought the Ann Esther Inn Motel on Clearwater Beach, which they owned and managed for more than 30 years. They retired to a home in Carlouel on Clearwater Beach, only steps from son George's home and family. Joann's truest lifelong joys were cooking, baking and enjoying her three grandchildren, Billy (Athanasiou), Yana (Athanasiou) and Alex (Carr). She lit up at the sound of their names, was delighted to babysit at a mere moment's notice, and cherished them into their own adulthood. In 2017, Joann lost her only son to leukemia. The loss of George was difficult to bear, and the beautiful memory-filled home became impossible to manage. Joann and Bill moved to a lovely apartment home nearby, where they enjoyed making new friends and where Joann kept up with her baking and bestowing treats (and advice, as usual) to everyone she met. Joann is survived by her husband Bill, daughter Olga Carr (husband, Lee), her precious grandchildren Billy, Yana and Alex, and her beloved family in Greece. In lieu of flowers, please do something nice for someone and/or donate to the charity of your choice. A visitation will begin at 12 pm with the funeral service starting at 1 pm Saturday, January 23, 2021 all at Holy Trinity Greek Orthodox Church in Clearwater, with entombment to follow at Curlew Hills Memory Gardens.

Joann Athanasiou, 90, born May 11, 1930, in Athens, Greece, passed away peacefully on Jan. 16, 2021. An emigree to the United States in 1953, she worked as a seamstress and waited for her beloved husband-to-be, whom she'd met in Greece, to finish... View Obituary & Service Information

The family of Joann Athanasiou created this Life Tributes page to make it easy to share your memories.

Send flowers to the Athanasiou family.