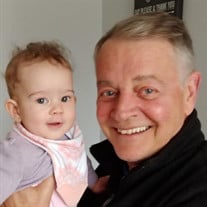 It is with deep sadness and love in our hearts we announce the passing of Jim Downes. Jim passed away in Tampa with his loving wife, Theresa Pajor, by his side on April 19. Jim’s two daughter’s, Caroline and Catherine (Jerome, Trinity, Ayvah & Ruby) love and miss him dearly. Jim is survived by his brother Derek (Vivian, Connor, Ciarán and Claire) and sister, Elaine. He will also be missed by his sister-in-law, Ana and brother-in-law, John. He is predeceased by his parents, James and Anne Downes. His sweet pup Bailey will also miss him and long walks in the park dearly. Jim was born and grew up in Dublin, Ireland. He later moved to Burlington, ON, Canada where he had his two girls. He then met his wife Theresa and loved adventures all over from Toronto to Texas, Rhode Island and settled in Tampa all while picking up new skills, like kayaking and wood working, and soaking up everything he could in life. Jim had a thirst for new knowledge, hobbies and opportunities to learn and grow. He spent time working in banks, on computers, consulting and and in real estate. His ability to naturally connect with others made each interaction you had with him impactful and often times full of laughs. Jim had a wonderful sense of humour that could light up a room and make your day brighter. He certainly left this world better than the way he found it. He will be missed every single day, and yet found in funny jokes, laughter, loving hugs and walks with Bailey. We love you.

It is with deep sadness and love in our hearts we announce the passing of Jim Downes. Jim passed away in Tampa with his loving wife, Theresa Pajor, by his side on April 19. Jim&#8217;s two daughter&#8217;s, Caroline and Catherine (Jerome, Trinity,... View Obituary & Service Information

The family of Jim Downes created this Life Tributes page to make it easy to share your memories.

It is with deep sadness and love in our hearts we announce the...

Send flowers to the Downes family.