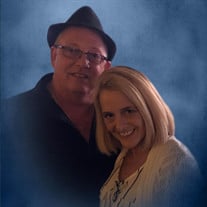 Jeff was born on November 15, 1962. He was an only child. His parents had him late in life. Jeff’s dad died when Jeff was 12 years old. He was raised by his mother, who died when Jeff was in his early 30’s. Jeff had no other family. For a girl, he was a perfect catch -- no in-laws, never married, and no kids. Jeff enjoyed playing baseball and football as a preteen and teen. He was very good in sports which he told me often. What he didn’t tell me was that he was also in band. I found this out when I was going through an old photo album. I’m sure if he was good in band, he would have let me know. In high school, Jeff decided he wanted to work with computers. He graduated United Electronics Institute with an Associates in Science, and he worked with computers ever since. It was a perfect career for Jeff as he liked to fix things and figure out how things worked. He would not give up until he could fix the problem. During his young adult years, Jeff lived a good life. He made a decent salary, he went out, he had girlfriends, he developed lifelong friendships, and he had his mom. But something was missing from his life -- me. In 1996, Jeff was working at The Fund. I also started working at The Fund that same year. That is where Jeff and I met. We talked and found out that we both liked Halloween. Our first date was in October 1996, when we went to a haunted house at Church Street Station in Orlando. Jeff was checking into the hotel and the clerk asked about what type of room he wanted, one with a king bed or one with a queen bed. Jeff said, “How about a room with two beds.” I’m not going to tell you if we used two beds, but I will tell you, we did have our first kiss. On February 14, 2002, Jeff chose me to be his wife and proposed. On July 4, 2002, Jeff became a husband, dad, and in-law. But Jeff was not as lucky as me because he now had in-laws. I have siblings, a mom and dad, nieces, nephews, aunts and cousins. He loved them as if they were his own. Jeff continued to build a life and home with his wife and stepson. On December 19, 2004, Jeff had a son. Samson was his pride and joy. Throughout the years, Jeff was a good provider, an awesome husband, and a loving dad. Jeff enjoyed watching professional sports. He never missed a Gasperilla parade. He was a member of the Rough Riders club. Jeff loved the water, fishing and boating. He liked watching movies and Jeff really liked Elvis. If I played Elvis, he knew it was going to be a very good night. Sadly, on November 18, 2020, at the age of 58, Jeff did not wake up. He died peacefully in his sleep, next to his wife after a night of Elvis. I want to mention my favorite things about Jeff. He had a sense of direction while I have no sense of direction at all. I can get lost in my house. Jeff could go somewhere one time and remember how to get there forever. Before GPS, if I got lost, I could call my husband from anywhere and he could bring me home. I was never lost when I was with Jeff. He could fix things, which was good, because I can break things. Little did Jeff know that he would be fixing the things I broke for the rest of his life. Jeff loved me. One day, I was going to girl party; it was a candle party or shower. He called me and told me to take a different way home because traffic was very bad. When I left the party, I called him and asked about the traffic. He said all is clear. When I got home, he told there was no traffic, but there was a dead cat on Sunset Point Road, which he was afraid was mine. He wanted to clean it up before I saw it. Luckily, it turned out to be another cat. He loved his sons. When Heath was a teenager and the brakes went out on his car, Jeff dropped everything and was out of the house as fast as he could to make sure Heath was safe. It would break Jeff’s heart when he saw Heath being treated poorly. Jeff was always there for Heath. Jeff loved to buy Samson clothes and dress him. I used to tease Jeff and say Samson is a baby not a doll. Jeff wanted Samson to have everything he wanted and needed. Jeff signed Samson up for any sport he wanted to play and rarely missed a game or practice. He was very proud of Samson. Samson is good in sports and is very smart. Jeff believed Samson is going to be very successful one day. Jeff loved critters and has always owned many pets. Our house is known as the Cantrell Kennel. Jeff’s coworkers loved him. Jeff didn’t like to let his coworkers down. When he changed out a computer, he would make sure the user had the same desktop as the old computer. He also took his time with his coworkers. He wanted to make sure the user was happy and he would answer all of their questions. He wanted to provide top notch customer service and felt bad when he couldn’t. Jeff was a loving husband, father, and in-law. He was loyal and he cared about his friends and coworkers. He was just an all-around good guy. He will be missed, remembered and loved. Jeff was the best husband ever. I am thankful for our time together and his peaceful death. Till death did us part. I love you husband.

The family of Jeffrey W. Cantrell created this Life Tributes page to make it easy to share your memories.

Send flowers to the Cantrell family.