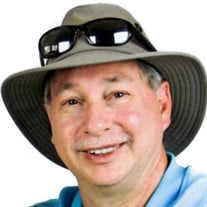 On Friday, February 5, 2021, James Robert Scheuerman went home to be with the Lord and his family in Heaven. It is both with great sadness and hope, that we celebrate his life. James was born in Medina, Ohio on April 18, 1956. He was raised by his loving parents, Franklin and Marilyn Scheuerman, alongside his siblings Robert and June. In 1971, he and his family moved to Clearwater, Florida, where he met his future bride, Karyn Colletta at Grace Baptist Church. They dated for two and a half years and were later married in 1978, at Lakeside Community Chapel where they had attended youth group together. James studied environmental engineering in trade school and went on to work for varying engineering firms, until ultimately settling at AECOM, where he worked for over twenty five years. In 1982, their first child, Heidi was born. Six years later, their son Brian also joined the family. Brian was born with special needs and their family emerged themselves in supporting other families, like their own. In 1993, James took Brian to play baseball, with the Challenger Little League in Clearwater. He began coaching and later took over as Vice President of the Clearwater Division. James had a deep desire to help others and never met a stranger. If he were out in public and noticed a family who had a child with special needs, he would invite them to join the league. Over the years, hundreds of families were blessed by his reaching out and kind invitations to “play ball!” James’ other hobbies included photography, woodworking and cycling. He loved to ride his bike through the streets of Safety Harbor and the Pinellas Trail, often making new friends along the way. In 2009, he became a grandfather and his grandchildren became a highlight in his life. He loved to play with them, especially outside on the tire swing, in the pool and at the beach. They will miss him dearly. He was a wonderful husband, and a kind and loving father to his children and grandchildren. James was preceded in death by his parents and sister, June. He is survived by his wife, children, son-in-law, two grandchildren and brother. A private service will be held at Curlew Hills Memory Gardens, this month. Donations can be made in his honor to The ARC Tampa Bay, where his son Brian attends programs alongside other adults with special abilities. “Blessed are the merciful, for they will receive mercy. Blessed are the pure in heart, for they will see God. Blessed are the peacemakers, for they will be called sons of God.” (Matthew 5:7-9)

On Friday, February 5, 2021, James Robert Scheuerman went home to be with the Lord and his family in Heaven. It is both with great sadness and hope, that we celebrate his life. James was born in Medina, Ohio on April 18, 1956. He was raised... View Obituary & Service Information

The family of James Robert Scheuerman created this Life Tributes page to make it easy to share your memories.

Send flowers to the Scheuerman family.