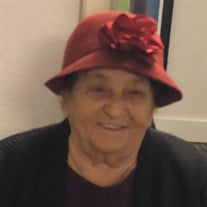 Irene Poulos Irene was born in the small village of Lapata, Greece, in 1924. She lived a quiet life on the family farm, where she met her future husband, James. Irene married in 1938 in Kalavrita, Greece. Irene gave birth to her first son, Peter, in 1940. James and Irene welcomed their second child Angelo in August of 1942. In 1945, they welcomed their third son, Paul, followed by their fourth son, Thomas, who was born in 1947. Their first daughter, Helen, was born in 1950. Due to the German invasion of Greece, times were difficult, which led to James and Irene deciding to move to America. In October of 1951, the family was separated, when James and Peter embarked to America to pave the way for the others to arrive. In December of 1951, Irene left for America with four children and a baby on the way. After a long journey by boat, they arrived in February of 1952. The family was reunited and sponsored by Irene’s Uncle Tom in Mount Union, PA. Shortly after arriving in America, the couple welcomed their daughter, Annie, in March 1952. In 1953, their last son, George, was born. After some time in rural Pennsylvania, the family relocated to Flushing, NY in 1958. While in New York, Irene worked outside the home with a job in a plastics factory, creating handbags to help support the family. After multiple years at the factory, Irene found her favorite job of all, working in the housekeeping department of Flushing Hospital. At the hospital, Irene was nicknamed, “Ms. Universe”, due to her popularity. She was named employee of the month frequently. Irene loved working in the hospital until her begrudging retirement in 1989. She did not want to leave as she enjoyed the camaraderie with the doctors, nurses, patients, and other workers of the hospital. If you knew Irene, you knew she loved to talk, possessed a hearty laugh, and always had a kind word for all. After a lifetime of winters, James and Irene decided to leave for the sunny embrace of Florida in 1993. Irene was loved by all. She was short in stature, but a force to reckon with. She was always positive even through the most difficult times in her life. She never gave up and encouraged everyone to do and be his or her best. She was a devoted daughter and wife and loving mother, mother-in-law, grandmother, and great grandmother. Irene was blessed with 13 grandchildren and 20 great-grandchildren. In lieu of flowers, donations can be made to the Holy Trinity Capital Campaign in memory of Irene Poulos at: https://www.htclearwater.com/capitalcampaign/capital-campaign

Irene Poulos Irene was born in the small village of Lapata, Greece, in 1924. She lived a quiet life on the family farm, where she met her future husband, James. Irene married in 1938 in Kalavrita, Greece. Irene gave birth to her first son, Peter,... View Obituary & Service Information

The family of Irene Poulos created this Life Tributes page to make it easy to share your memories.

Irene Poulos
Irene was born in the small village of Lapata, Greece,...

Send flowers to the Poulos family.