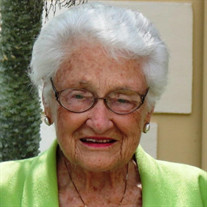 ST. JOHN, Maj. Ila N.(retired), 103, of Largo FL, formerly of Genesee MI, passed away Tuesday June 29, 2021 at Morton Plant Hospital in Clearwater FL. Ila was born June 1, 1918 in Flushing MI, daughter of Smith and Nettie (Kessler) St. John. Ila was a graduate of Mt. Morris (MI) High School class of 1936. She enlisted in the Women’s Army Auxiliary Corp in July 1942 and in January 1944 the WAAC was made part of the Army and became the Women’s Army Corp. She served in the Women’s Army Corp for 20 years, attaining the rank of Major, retiring January 31, 1963. She served tours in Japan (1950-53) and France (1957-59) and worked in the Chicago and Detroit Army Recruiting Offices. After retiring from the Army, she worked for the Girl Scouts, in Tampa FL, (1965-73) and was the Paymaster at the Grand Hotel, Mackinac Island, MI (1973-77). Ila also did volunteer work with Religious Community Services and Meals on Wheels in Clearwater FL. She was a long-time member of Skycrest United Methodist Church. Ila was preceded in death by her parents, sisters Erma and Agnes St. John and brothers Clark and Arville St. John. She is survived by nieces Cheryl (St. John) and Tom Wallingford of Troy NY; Wendy (St. John) and Jim Scott of Haslett, MI; nephew Curtis and Marsha St. John of Westerville, OH; several great-nieces and nephews, and special friend Lynne Read. A memorial service at Skycrest United Methodist Church will take place July 27th at 11:00am and burial in the Great Lakes National Cemetery, in Holly MI, will take place at a future date. Memorial contributions for Ila may be made to Skycrest Methodist Church, 2045 Drew St., Clearwater, FL 33765.

The family of Ila Norene St. John created this Life Tributes page to make it easy to share your memories.