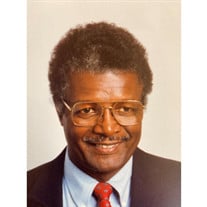 On Saturday, April 3rd, 2021 Howard L Smith, loving husband and father of two children passed away at the age of 87. Howard was born in New York and served in the United States Air Force, and later attended Hofstra University. He worked and retired with IBM after 31 years of service. He and his wife, Viola raised two children, Wendy and Steven. Howard had a huge passion for sailing, and also loved flying his own planes, racing cars, snow skiing and scuba diving. He had many hobbies such as reading and underwater photography. He was a member of Westgate Baptist church. Howard was not one to do things half –fast, and liked to set high standards of excellence in all that he did, but more importantly he believed in sharing his knowledge and experience with others. It was quite common to have him spend his off time from work teaching others; he had taught Scuba Diving at a local YMCA in Illinois on Friday nights, and spent many weekends giving flying lessons. He was granted a lifetime membership at the Davis Island Yacht Club and enjoyed serving time on the race committee as well as Fleet Captain, but most of all he really enjoyed the camaraderie of his sailing peers. He could be found at the club participating on Thursday night and Sunday races. Some of his fondest races/regattas was the Clearwater,FL to Mexico race, and the Clearwater, FL to Key West races. Howard enjoyed listening to many types of music, but was a big Earth, Wind and Fire, Miles Davis, Dave Brubeck and Doobie Brothers fan. Anyone who personally knew him would tell you that he was very intelligent, possessed a lot of wisdom, but was very humble. He was a great mentor to his children who will always remember him for not letting the color of his skin dictate what he could or could not do. If someone felt uncomfortable with his presence he really didn’t care because he felt that was their problem and not his. Very often he was the first or only African American participant and he was ok with that, as he knew he would be opening the doors and shedding light for others to follow. One example is Howard was the 1st African American to become a member of the Davis Island Yacht Club. He is preceded in death by his father, Louis Smith and mother, Louise Smith and two brothers, Roderick and Richard. He is survived by his wife, Viola Smith , his two children Wendy Smith-Sullivan ( James Sullivan), grandchildren Jasmine, Jada, and Tyler Sullivan and his son Steven Smith (Yoanis Alvarez). He will be greatly missed. Per his wishes a private family memorial will be held. The family is requesting no flowers please, and in lieu of flowers donations can be made in Howard’s name to Lifepath Hospice of Tampa, FL or Westgate Baptist Church, Tampa Fl Hospice:https://www.chaptershealth.org/for.../personal-giving /Westgate Baptist Church: https://westgate.org/guests-2/

On Saturday, April 3rd, 2021 Howard L Smith, loving husband and father of two children passed away at the age of 87. Howard was born in New York and served in the United States Air Force, and later attended Hofstra University. He worked and... View Obituary & Service Information

The family of Howard L. Smith created this Life Tributes page to make it easy to share your memories.

Send flowers to the Smith family.