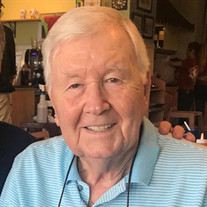 Horst D. Winter Today we celebrate the life of Horst Winter of Palm Harbor, FL, who passed away peacefully in his sleep on Monday October 25th at the age of 92. Born on May 16, 1929 in Danzig, Germany, Horst spent his early and teenage years surviving through the Great Depression and then WWII in war-torn Germany. It was a challenging start to his adult life, but five years after the end of the war, he was finally able to attend Heidelberg University where he studied economics. In 1956, while working in the alpine town of Garmisch-Partenkirchen, he met a beautiful American woman on holiday named Helga Menck. After a two-week whirlwind romance, they married just a few months later in New York City. In 1957 Horst emigrated to the United States to begin a new life with Helga and start a family. They soon welcomed a daughter Diedre (Dee), and son Keith 4 years later. Horst began his career as a commercial insurance broker in New York City, starting out as a clerk and working his way up to become a Vice President at an international Insurance brokerage firm. His proudest professional accomplishment was that he never lost a client. Business travel took him around the world to places like England, Europe, China and Bermuda. Later in life he also enjoyed traveling with his children to Germany, France, Bermuda, the Caribbean Islands, Asheville, NC and Estes Park, CO. His last trip at the age of 90 was to visit the WWII museum in New Orleans, LA with his daughter and son-in-law. He had a lifelong interest in WWII history because it was such a defining part of his story. Horst lived with his family in New Jersey for over 27 years. It was here that he launched his passion for sailing and boating on the waterways of the Navesink River and Raritan Bay. One of the family’s fondest memories was being part of Operation Sail in 1986 commemorating the renovation and 100th year anniversary of the Statue of Liberty. In 1993 Horst and Helga retired to Palm Harbor, FL. It was here that they met some of their best friends and enjoyed gourmet and potluck clubs, golfing, taking drives along the beach, hosting parties with friends and dining out. In 2000, they moved to The Villages, FL to experience retirement with even more activities and events. Sadly Helga passed away in 2003, and soon after Horst moved back to Palm Harbor to be near his son and daughter who both had moved to Florida in 1995 and 1997, respectively. As a young boy, Horst always admired the big, beautiful cars driven by the local factory owners and vowed to “have one of those someday,” a promise he kept many times over. He loved his cars… ranging from brands like Pontiac, Buick and Cadillac to BMW, Mercedes-Benz, Lexus and his favorite brand, Audi. In fact, he loved the Audi brand so much that he owned several of them and he was a regular at the local Audi dealership. A favorite pastime was cruising in his Audi listening to Frank Sinatra or big band music. Horst was an impeccable dresser, always making sure that he looked the part for whatever the occasion, and he was always on time…not early, but exactly on time. He also felt it was important to keep his life current with home improvements, as well as with new furniture and styles, and he even became somewhat tech savvy in the later years of his life. Along with his successful career, passion for cars and love of boating, Horst is remembered for being a devoted husband and father, a dedicated provider for the family and a caring friend to so many around him. He also enjoyed attending Harborside Christian Church with his son and daughter-in-law. He gave generously to his church and other local charities. His love for family, friends and community was evident to all. Horst lived a very resilient and determined life, using the mantra “whatever happens, just deal with it” which he learned from his mother and which he practiced every day, right up until his last. He was blessed with a full and wonderful life. We are grateful to have had him with us for so many years and will miss him dearly. Horst is survived by his daughter, Dee Meny (Doug) of Palm Harbor and son, Keith Winter (Katherine) of Dunedin, FL. In lieu of flowers, we request donations in Horst Winter’s name to one of his favorite local charities: Morton Plant/Mease Foundation Welcome to Morton Plant Mease Health Care Foundation (www.measefoundation.org) YMCA of Pinellas County Strengthening Communities | YMCA of the Suncoast (www.ymcasuncoast.org) Florida Sheriff’s Youth Ranches Home (www.youthranches.org)

Horst D. Winter Today we celebrate the life of Horst Winter of Palm Harbor, FL, who passed away peacefully in his sleep on Monday October 25th at the age of 92. Born on May 16, 1929 in Danzig, Germany, Horst spent his early and teenage years... View Obituary & Service Information

The family of Horst D. Winter created this Life Tributes page to make it easy to share your memories.

Send flowers to the Winter family.