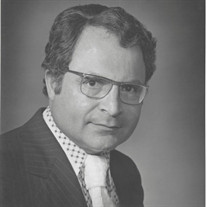 Henry R. Mahshie went home to be with his Lord and his beloved wife Louise on Sunday, April 18, 2021. They were parted for a little over 6 years which in consideration of their 75 year marriage seemed to be a short time but to Henry, it always proved a burden to his heart. Henry was a first generation American who came into this world with abundant energy and a desire to do better than his parents who spoke little or no English, but worked hard to prove true the "melting pot" component of the "American Dream." Henry began his working career in a staple of his family's experience and eventually owned his own grocery store. He like millions of his generation, answered his Country's call to service during World War II and served as a military policeman in the United States Army. Returning home from the service, he made a leap from the retail grocery business to the world of finance and insurance at some risk, joining the Prudential Insurance Company as an agent. Henry's 25 plus years with the Prudential saw him elevated to management positions where he eventually was moved to the head of training for Prudential's operations in Canada based in Toronto. For Henry and Louise, whose dream was always living in Florida, the move may have been the wrong geographical direction, however it provided an experience that brought new friends and family members. Henry and Louise eventually returned to Syracuse where Henry spent another 20 plus years with the Massachusetts Mutual Life Insurance Company and re-building a practice of clients and friends whose resulting relationships would last a lifetime. Henry remained active in business until his 80's when the warmth of Florida and the needs of his darling Louise nudged him into retirement and a phase of life where he could enjoy his children, grandchildren, and great grandchildren. Henry accomplished what he had set out to do so many years prior. He elevated himself far beyond the levels achieved by his parents. In Henry's mind this was truly the American ideal of how things are supposed to progress. He instilled the value of education and hard work in his children who were all able to, in that most American tradition, accomplish more for their own families just the way Henry had done. All who knew Henry understood that integrity, honor, and honesty were the characteristics he cherished and valued most. They were the cornerstones of the life he built for himself and Louise and the many lives he came in contact with, which were always helped and improved by his touch. Upon the sadness of his departure, his family takes great comfort in the promise of his being reunited with Louise and God's promise of resurrection. We also take immense pride in a life, given such a meager and humble beginning, having been projected to levels beyond expectation with simple determination, drive and vision. Henry and Louise lived what we all aspire to...a truly American experience. In lieu of flowers, contributions may be sent in memory of Henry to Suncoast Hospice Care Center, 164 West Lake Road, Palm Harbor, Florida, 34684.

Henry R. Mahshie went home to be with his Lord and his beloved wife Louise on Sunday, April 18, 2021. They were parted for a little over 6 years which in consideration of their 75 year marriage seemed to be a short time but to Henry, it always... View Obituary & Service Information

The family of Henry R. Mahshie created this Life Tributes page to make it easy to share your memories.

Henry R. Mahshie went home to be with his Lord and his beloved...

Send flowers to the Mahshie family.