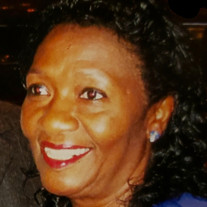 With deep sorrow, the family of Glenna Merle Stevens announces her passing on February 20, 2021 in Scotch Plains, New Jersey. Glenna was born on October 22, 1932 (registered birthday October 28th) on the island of Jamaica in Tweedside, a small mountain town in the parish of Clarendon. Glenna had 16 siblings that she adored. The family lived on a farm and had several businesses including a grocery store and a sugar mill. Growing up in Tweedside, Glenna loved to cook for her family, work in the family store, and take care of her younger siblings, Elaine (aka Claire) and Neville. Glenna also took care of her many nieces and nephews, all of whom she cherished as her own. Glenna held a captive audience when she told stories. Glenna laughed until she had tears in her eyes as she shared some of her childhood memories. One of Glenna’s passions was saving coins. She once saved 16 pounds ($32 US) which was considered big bucks back then. Glenna attempted to double her money by betting all of her savings on her father’s racehorse. Unfortunately, she was unaware the race was fixed, and she lost all her money when the jockey jumped off the horse, throwing the race. Glenna left Tweedside at 16 years old to live with her older sisters, Myrtle and Lottie, in the big city of Kingston, Jamaica. In 1956, Glenna migrated to London, England to live with her brother, Harry and his wife. In London, Glenna met the love of her life, Jonathan Stevens, known to everyone as ‘Steve’. For Steve, it was love at first sight (of her picture). Steve and Harry met on the ship when they both migrated to England in 1952 and they became best friends. When Harry showed Steve a picture of his sister, Glenna, Steve told Harry he was going to marry her one day. When Glenna arrived in England, Steve put his plan in action. Glenna would accompany Harry and his wife to the movies every Friday night. Of course, Steve would tag along. After several months of tagging along, Steve decided to make his move. One movie night, Steve noticed that Harry was not ready. He took that opportunity to take Glenna to the movies alone, and so it began. Steve secured that first kiss and within two years, Glenna and Steve were married and had a baby boy, Nicholas. In 1960, Steve, Glenna and Nicholas moved from England to the United States to a railroad apartment on Columbus Avenue in Manhattan, New York. Glenna worked cleaning homes while attending Monroe Business Institute. Glenna worked at Honeywell Corporation for about 8 years. Glenna was always a champion for her family. When Steve became too sick to work (later determined to be asthma), Glenna held down two jobs while caring for Nicholas until Steve’s health improved, months later. In 1965, Steve and Glenna purchased their first home on Montgomery Avenue in the Bronx, NY. Their home served as a bridge to many generations of the Roberts and Stevens family migrating to the United States from all parts of the globe. During this time, Glenna and Steve welcomed their baby girl, Nicole, who they referred to as their ‘little princess’. They also welcomed her niece, Leonie, into their home, completing this family of five. Glenna always loved children and they love her. Glenna spent many years caring for the children of friends and family in her Montgomery Avenue daycare. In the early 70’s, Steve and Glenna were doing well enough to purchase their second home in Yonkers, NY. The same day Nicole started kindergarten, Glenna returned to the business world and began a new job as a key punch operator for Polychrome/Sun Chemical in Yonkers, NY. She worked for Polychrome for 25 years before retiring. Glenna and Steve continued to welcome family from Jamaica and England into their home including Glenna’s father, Enos Roberts. Glenna cared for her father until his passing. In 1999, Steve and Glenna moved to Odessa, Florida to enjoy retirement in the sunshine and warm weather, which they sorely missed from Jamaica. They loved traveling all over Florida to visit many relatives and friends who had relocated there. Though in Florida, Steve and Glenna maintained a strong bond with all their family and friends throughout the US, Jamaica, and England. Their children, grandchildren, great grands, nieces, and nephews would visit Glenna and Steve in Florida throughout the year. Every Christmas season, Glenna and Steve would spend time in NJ and Washington DC with their children and grandchildren. Steve departed this earth in 2015, leaving a huge hole in Glenna’s heart. For the first time in her life, Glenna lived on her own. Eventually, she moved to NJ to live with her son and his family. Glenna will be remembered as a kind and gentle soul who always provided love and support to family and friends. The simplest pleasures in life brought her great joy. She loved to cook, rock babies to sleep, and take care of her family. Glenna was a great listener, gave the best hugs, and drew many people to her home on Sundays for her Jamaican dinners. Glenna was more than happy to be a central figure in the lives of her children and grandchildren. She was a star in their eyes and that was all that mattered to her. Glenna is survived by her children Nicholas (Dominique), Nicole (Mark), and heart daughter, Leonie, as well as her grandchildren Janine (Karim), Tiffani, Melanie, Neal, Jonathan, Colt, Edie, Dana (CJ), Natasha (Stamp); great grandchildren Karim, Jaila, Kai, Ariana, Trey and Solana; siblings Elaine (Michael, deceased), Neville (Annette), and George (aka Curl); and a host nieces, nephews, and cousins, too many to name.

With deep sorrow, the family of Glenna Merle Stevens announces her passing on February 20, 2021 in Scotch Plains, New Jersey. Glenna was born on October 22, 1932 (registered birthday October 28th) on the island of Jamaica in Tweedside, a small... View Obituary & Service Information

The family of Glenna Merle Stevens created this Life Tributes page to make it easy to share your memories.

With deep sorrow, the family of Glenna Merle Stevens announces...

Send flowers to the Stevens family.