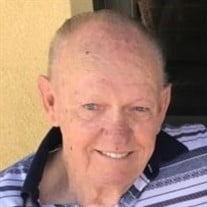 Gilbert “Gil” Monroe Smith (88), born in Neptune City, NJ on August 25, 1932, passed away on February 24, 2021 in Clearwater, FL. In his final days, he was surrounded by his loving family. Gil moved to the Canal Zone with his parents and three brothers at a young age. He graduated from Cristobal High School, Class of 1952. Gil was drafted into the Army after high school in June 1953, and served two years in Germany. He met his future wife after he was honorably discharged from the Army in May 1955. Gil attended Monmouth College in New Jersey and graduated with a business degree in 1960. He returned to the Panama Canal Zone where he and his fiance, Pauline “Sue” Pincus, were married at the Holy Family Church in Margarita on July 16, 1960. They had two daughters, Linda and Julie, and three sons, Larry, Gilbert, and David, who all graduated from Balboa High School. Gil worked as an accountant for the Panama Canal Commission in the Administration Building until his retirement in December 1990. After Sue’s retirement in 1991, they moved to Clearwater, FL to be close to their children. Gil enjoyed many activities in his youth. He was known to be a superstar athlete in baseball, basketball, and football. During his years of fatherhood, Gil continued his love of sports, playing softball and coaching children in several Pacific Side Leagues. On weekends, he enjoyed meeting his friends at the Elks Club and playing in horseshoe tournaments. After moving to Clearwater, Gil could hardly wait to be eligible to play softball in the 70 and over league. Being the “youngster” on the team, he not only played the entire game, but was utilized as a “runner” for many of his teammates. Gil’s weekly activities included going to the Tampa Bay Downs Horse Racing Track with his youngest son, David, as well as meeting up with his former Canal Zone friends to play golf. Those of you that knew Gil well, are familiar with his passion and gift for telling jokes. He loved to tell his favorite penguin joke, and didn’t care whether you had already heard it or not! Gil was preceded in death by Joseph and Teresa Smith (parents), Joe Smith (brother), Alice Pincus (mother-in-law), and Jared Smith (grandson). Family members surviving him include Sue Smith (wife of 60 years), Stan and Richie Smith (brothers), Linda Badger, Larry Smith, Julie McCullough, Gilbert Smith, and David Smith (children), as well as nine grandchildren and two great-granddaughters. In lieu of flowers, please consider donating to Sisters of Mercy in Colon, Panama at https://secure.etransfer.com/eft/flexblockcode/donation1.cfm?d2org=SOMACCASA&d2tool=donate Use the following instructions to fill out the donation form: • Apply my gift to: Panama Ministries • Name of whom your gift is in memory/honor of: Gilbert Smith • In comment section: MUCEC

The family of Gilbert Monroe Smith created this Life Tributes page to make it easy to share your memories.