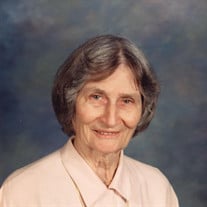 Gertrude “Trudy” Katherine Urso May 8, 1925 – May 5, 2021 Trudy Urso passed away in a hospital, three days shy of her 96th birthday, and ten days after suffering a serious injury in her residence at St. Mark Village Memory Care Center. It was a heart-breaking end to a remarkable life. Trudy grew up in Katherinfeld, a village in the Banat region of Serbia. Her mother, Maria Urso, was one of five sisters, so Trudy had many cousins. She attended college nearby but as WWII came to a close, about Christmas of 1944, Trudy and some of her cousins were imprisoned by the ruling Soviets and transported to Ukraine, forced to labor in the coal mines. Her parents and many in her family were killed or perished in brutal prisons. She survived and in 1949, the Red Cross obtained her release. With only an identity card and a rail ticket, and her family gone or scattered, she located a cousin in Hanover, Germany who took her in, and she found work as a housemaid. Trudy wrote letters hoping to find any of her family that was still alive. She knew that her Godmother (and Aunt) Gertrude Weiss and family had moved to Regina, Canada before the war. After many months, the letter caught up with Gertrude in Hamilton, Ontario, and a plane ticket was sent to Trudy. Despite knowing very little English, she got a job at a hospital, studying at night to learn the language and the profession of nursing. Continuing education led Trudy to nursing and management opportunities in Ann Arbor, Michigan, in 1969. She completed a Bachelor of Medical Science degree from Emory University in 1978, at age 53, specializing in Medical Records Administration. She did pioneering work in the collection and registration of cancer data, which later evolved into a national cancer registry. In about 1989 Trudy retired to Clearwater, Florida, and in 2004 moved to St. Mark Village in Palm Harbor. She stayed active in her local communities and made many trips across the continent and overseas, often visiting her cousins in Europe and Canada. Although she never had her own family, Trudy was the glue that connected her many relatives and friends. She is survived by one first cousin in Germany, Peter Weber, and many second cousins. We thank her very much for our family connections, and fondly remember her optimistic view of life and persistent faith in mankind. Memorial Service 2:00pm Thursday, May 27, 2021 at St Mark Village, 2655 Nebraska Ave. Palm Harbor, 34684.

The family of Gertrude "Trudy" Katherine Urso created this Life Tributes page to make it easy to share your memories.

Send flowers to the Urso family.