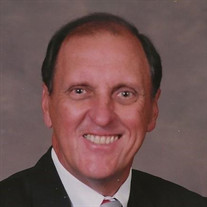 Passed away on 4/2/22. He was born on February 4, 1945, and grew up in Adena, Ohio. He was elected to Boys State Ohio his senior year in high school and went on to get both bachelors and masters degrees from Kent State University and a law degree from the University of Akron. While earning his advanced degrees he taught 6th and 8th grades and political science at Kent State University. He and his wife Melody Wordsworth Figurski were married in 1967 and in 1975 moved to Florida where he began his career in law as an assistant Pinellas County Attorney and then the Pasco County Attorney. He began his private practice in the area of land development in Pasco, eventually ending his career with the firm of Figurski and Harrill. One of the most important things in his life was service to his community. He served as Presidents or Chairs of UPARC, now The Arc Tampa Bay Board; The Arc Tampa Bay Foundation Board; The Mease Countryside Hospital Board; The Clearwater Bar; Clearwater’s Planning and Zoning Board and Charter Review Committees; the Concourse Council in Pasco, the West Pasco Bar Association; Paul B. Stephens Student Center PTA; Eagle Estates Homeowners Association; and Countryside Country Club’s Board of Directors. He also served as a member of the Greater Clearwater Chamber of Commerce, the Clearwater Jaycees, the Cottee River Lions Club, and the Espiritu Santo School Board. Jerry received many awards and honors for his service including: Mr. Clearwater in 2013, Mr. Countryside in 2001, Leadership Pinellas, Board Member Emeritus of The Arc Tampa Bay Foundation, Who’s Who in Florida, Who’s Who in America South and Southwest, Who’s Who in American Law, Who’s Who of Emerging Leaders in America, Leading American Attorneys, and Magnificent Member at Countryside CC. He loved the Tampa Bay Buccaneers and was a season ticket holder since 1976. He enjoyed tennis, golf, dancing, reading, and writing. He was able to complete his autobiography which has been bound and distributed to many members of his family. He is survived by his wife of 54 years Melody Wordsworth Figurski; his children Tracy and David (Melissa) Figurski; his grandchildren Scott, Katherine, and Jillian; his brothers Ronald and Robert, and many other relatives. He was predeceased by his parents John and Julia Figurski; his brothers John and Eddie ; and his sister Genia Figurski Black. A funeral service will be held at Espiritu Santo Catholic Church at 10 am on 4/20/22. In lieu of flowers the family would prefer donations in his memory to The Arc Tampa Bay Foundation, 1501 N. Belcher Rd., Ste. 244, Clearwater, FL 33765 or www.thearctbfoundation.org.

Passed away on 4/2/22. He was born on February 4, 1945, and grew up in Adena, Ohio. He was elected to Boys State Ohio his senior year in high school and went on to get both bachelors and masters degrees from Kent State University and a law... View Obituary & Service Information

The family of Gerald Figurski created this Life Tributes page to make it easy to share your memories.