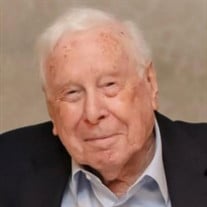 Eugene “Gene” Kolk was a beloved father, husband, grandfather and great grandfather during his incredible 99 years of life. He passed away peacefully in the early hours of Thursday, March 31, 2022. Gene had a long and full life. He was born on May 13, 1922, in New York City, New York to loving parents, Joseph and Belle (Friedman) Kolk. Gene grew up in Brooklyn and Queens, New York and was a 1940 graduate of the RCA Institute where he studied electronics. On November 6, 1942, he enlisted in the United States Army where he served in the 3163rd Signal Service Company teaching Radar School during World War II. While enlisted, Gene earned the American Campaign Medal, Good Conduct Medal and the World War II Victory Medal. After his honorable discharge in 1947, he started working at his father’s millinery company, Diamond Button Works, in New York City. He later went on to become the President of Sommers Plastics, which was a vinyl distributor based out of Clifton, New Jersey. In 1947, he married Lillian Schecter. Together they had one son, Craig who was born in 1949. Lillian preceded Gene in death in May 1972 at 52 years old after 25 years of marriage. Gene was lucky enough to find love twice in his life. He met his second wife, Olene Clark, and her two daughters—Susan and Janet, in 1977. They were married August 9, 1980 in Miami, Florida. After their wedding, Olene moved to New Jersey. Gene retired from Sommers Plastic in 1987 after a fulfilling 27-year career. Following Olene’s retirement in 1994, they moved to Tarpon Springs, Florida before moving to Tampa, Florida for the last seven years of his life. Gene was an avid follower of the stock market and sports. He enjoyed building model ships and trains. He was also a ham radio operator—KB2LAU was his call sign. Traveling was a favorite pastime for Gene and Olene whether it was for business or pleasure—with trips to Europe, Japan, Korea, Israel, Egypt, Canada, Jamaica, St. Martin and countless adventures within the United States. Gene never met a stranger and will always be remembered for his kindness and willingness to help others. Gene is survived by his loving wife of 41 years, Olene; his son and step daughters: Craig and his wife Sue of Williston, Vermont; Susan and her husband George of Tampa, Florida; Janet and her husband Brian of Knob Noster, Missouri. He leaves behind his 7 grandchildren: Taylor (and husband, Jim), Joseph, Tori, Devon (and husband, Carter), Brianna (and husband Derick), Samantha (and husband Ryan), and Aryn (and husband Kurt): and 9 great-grandchildren: Corbin, Rylie, Annie, Carter, Patrick, Thomas, Myla, Jase and Cohen. He also leaves behind his sweet cat Geno, who will sadly miss him. In addition to his parents and his first wife, Lillian, Gene was preceded in death by his sister Lucille. In lieu of flowers, the family requests donations be made to Suncoast Hospice Care Center at 164 W. Lake Rd, Palm Harbor, FL 34684 or The Honor Flight Network at www.honorflight.org

Eugene &#8220;Gene&#8221; Kolk was a beloved father, husband, grandfather and great grandfather during his incredible 99 years of life. He passed away peacefully in the early hours of Thursday, March 31, 2022. Gene had a long and full life.... View Obituary & Service Information

The family of Gene Kolk created this Life Tributes page to make it easy to share your memories.

Send flowers to the Kolk family.